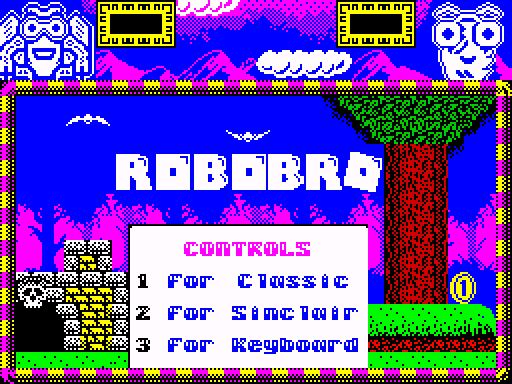 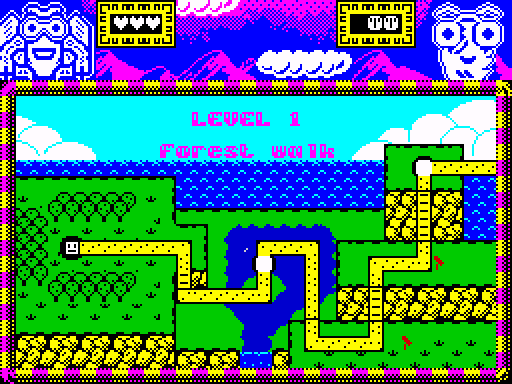 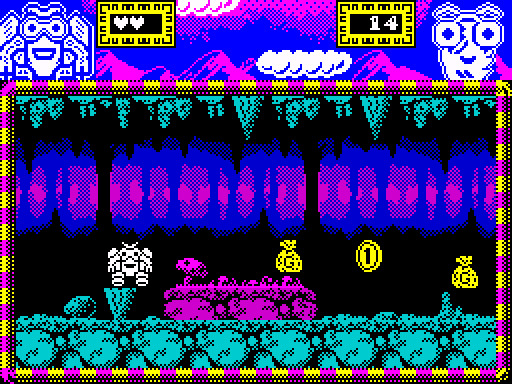 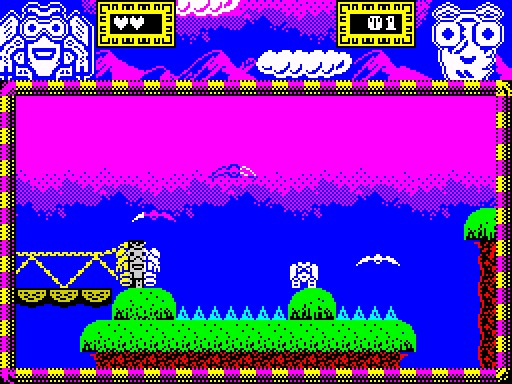 In the UK, we knew of only three Spectrums. The first was the 16K model with its rubber keys and tiny space bar. The second had 48K and a real keyboard and tattooed keys. And the third came with a built-in tape recorder and a light gun. But... it was a different story over in Russia, where the Spectrum was used as the base-plate for a whole load of other computers. And, rather annoyingly to us Brits, the Russians see all these Russian "Pentagon" and "Scorpion" machines as Spectrums too, and every now and then they release a disc-based game for one of them. RoboBro is one of them.

So how do you get to play it? Well, download the Spectrum emulator Fuse (if you haven't already), find the Pentagon/Scorpion ROMs on Google, download them, configure Fuse to point to them and then boot the RoboBro disc image. Easy when you know how, a pain in the proverbials when you don't.

In RoboBro you play Robo. He's a sort of nerdy-looking face with a backpack seated on a tank-like continuous-track propulsion system. He, and the rest of the sprites, are big, making for a flick-screen platform game reminiscent of the Oliver Twins' Dizzy games. In fact, RoboBro was apparently written with a Dizzy scripting engine for the Pentagon. The trouble is that it's nowhere near as imaginative as that classic.

I will say one thing for it. It's an attractively presented game. Before it starts you get to see a map of all the different stages you can visit and they look pretty exciting. Another big plus is that it's got a funky background tune by Yerzmyey. In fact, it's got a fair degree of polish, with a very nice loading and opening screen, password facility and the benefit of oodles of memory to play with because it's disk-based. It looks and plays exactly like a Spectrum game, actually, and I understand that there's very little difference between the Russian clones and the 128K Spectrum machine.

But... it's clunky to play. The big sprites are reactive, everything is animated well, and yet, hmmmm, it just doesn't seem to have realised its potential. The first few screens give you a few nasties to squish, a few spikes to avoid, a few steps to jump on and off and not a lot else. You then reach the first set of obstacles that requires pixel-perfect positioning and it all quickly becomes so frustrating that you give up. Or, at least, I would have done had I not forced myself to give it a fair review.

Probably the most frustrating thing about RoboBro is the collision detection. Protruding and retracting spikes wipe out one of your three lives when you're clearly nowhere near them, as do the fishes that leap from the waters on stage two. The arc in way Robo jumps isn't fully controllable. It's hard sometimes to get him accurately positioned to make critical jumps. When you have a combination of patrolling nasties and spikes, it's just too difficult to be fun.

It's a bit of a shame really. There's a good game in here struggling to get out. Indeed, there may be a really good game hiding beyond stage two. I just can't see many people having the patience to play it for long enough to find out.