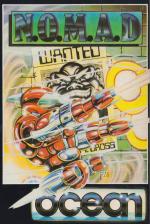 Nothing to do with roaming desert peoples, but a Nemesis Organisation Mobile Attack Droid that is on a mission to destroy one Cyrus T Gross in the heart of his heavily fortified city. To do that it has to battle past many different levels and types of defence that will make life extremely tough for even the best players.

The city is composed of many screens, nearly all of which have some sort of deadly obstacle in them. They are flick screens mostly connected by corridors giving you only one possible exit to continue your search. At some points you will have a choice though so exploration will be needed to find the easiest and quickest route.

The Nomad itself is difficult to control at first as it has some awkward movement characteristics. It can be moved forward or reversed but rotates left and right to point in the desired direction. This makes rapid turning difficult to achieve. The other thing to be mastered is the inertia which afflicts the machine and will need practice to control so that you don't end up charging into things.

The other thing that will restrict Nomad's movement but not kill him are the gateways that crop up. These are opened and closed by switches that Nomad can activate. Unfortunately these aren't on the same screen so that trial and error is needed to find the correct position for a switch to allow you to move on.

The first obstacle you encounter in Gross's armoury is a circular unit which randomly spits out fire in any direction. Like all the other defences, this can be blasted away with Nomad's twin lasers leaving a nasty explosion mark on the screen. The next weapon is the one most commonly encountered in the early stages, a cannon.

Cannons are set into the wall and blast out shells at regular intervals that travel in a straight line. Both cannon and shells can be destroyed but one touch from a shell will end a Nomad life. Later obstacles get even more deadly and won't wait for you to come to them. There are bouncing, smiling faces that happily blow you up and square blocks that fire homing missiles which rapidly zoom towards you.

Another feature that will cause problems are the magnetrons. These are strong magnets set in the walls which attract the Nomad in a particular direction. This acts like gravity so that the Nomad will fall down a screen, often into plenty of trouble that is consequently extremely hard to deal with.

The graphics are very colourful but chunky too so that Nomad has trouble getting round some corners. Once you've got a hang of the control, the gameplay can be quite addictive as you try to battle through to new screens. It's basically a simple game that will take some mastering.

Nothing spectacular here - Nomad is essentially just a colourful shoot-'em-up. As such it delivers the goods. But are they the goods that we want very much these days?

The inertia is infuriating, and the random deaths are frustrating. These can be overcome, though, with a little perseverance what really does the game in is the feeble firepower you've got, the dreadful sound and the ridiculous explosions. It's a budget game without the cheapness.

P. Very tough to work your way through the whole thing.
P. Nice features like the gravity and inertia.
P. Rewarding as you progress to a new section.

N. Some sections rely a lot on luck through random factors.
N. Control can be annoyingly hard.

A bit easier on the eyes in mono, if anything. Removing all those red/green combinations is a distinct improvement.

Nothing spectacular here - it's essentially just a colourful shoot-'em-up. A budget game, without the cheapness.