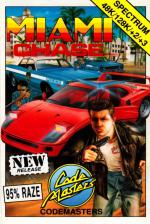 I've never figured out how Miami cops can afford to travel around in Lambourginis while your average London bobby has to make do with an Austin Metro with no wheel hubs on it.

The police Lieutenant (Loo tenant - he's American and apparently lives in an oak outhouse) in Miami Chase is quietly driving his lilly white sports car around the seedy streets of Miami when he receives a call to apprehend an arch drug dealer in the Miami docks. He must go to it, guns blazing, avoiding innocent motorists and showing little regard for the paintwork on his supercar! The game isn't too difficult to control, just a little annoying and as far as this goes I must say I prefer keyboard control rather than joystick as it's marginally more accurate.

Miami Chase is quite a long game and the graphics are actually better and more colourful than many other vertically viewed shoot 'em up chase games but the level of action won't really sustain interest for a long time.

Well I certainly wouldn't pay out for this one as it's really nothing more than an overhead racing game. And as such it's actually less exciting than trying to get a reluctant pussy out of a tree.

I certainly wouldn't pay out for this one... It's really nothing more than an overhead racing game.