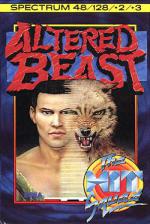 Altered Beast was very popular with me in the arcades. I especially liked the idea of visually transforming into different beasts for the tasks ahead. The animated bits in between were evocative and imaginative and have been retained in this version.

The gomeplay is very simple - walk along the preset routes and punch/kick shoot anything that gets in your way. A wolf patrols these routes and once dead throws up a spinning ball which you collect to complete your transformation. He-man, Were wolf, Flying Devil and Were-Tiger are all part of the arsenal available to you and along with each animal's special weapon.

Graphics in the first world are terrible, with disgusting colour bleeding and blocky animation, but it's made up for in some of the later screens. Scrolling is slightly jerky, but not too much. The multiload system employed does not enhance the game and unless you can't live without this conversion it's probably best forgotten and left alone.

Looking rather dated by today's standards. When first reviewed we said it had great graphics, but you'd be hard pushed to find anything, even the lowest of games, looking this dire today. Could be fun for some.

You'd be hard pushed to find anything, even the lowest of games, looking this dire today. Could be fun for some, I suppose.