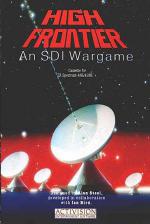 The idea of SDI is that once perfected, a series of laser satellites and inertial weapons satellites will be able to pick off incoming missiles and so preserve truth, justice and the American way.

The likelihood that the rest of the world is going to be a pile of radioactive slag doesn't seem to worry the Pentagon much.

Enough of politics, Activision, which publishes High Frontier, has called it a wargame. It isn't, it's a joystick-controlled strategy game. An even more accurate description might be business management game for participants in the arms race!

You are in charge of the development and eventual use of the American SDI system. Your task is to juggle the various resources in men, money and materials that you have at your disposal, to create the best and most effective system you can. How well you have succeeded will become obvious after the most acid test of all - World War III.

There are a number of different screens which can be accessed, and all except one have a common border of control icons.

The R&D screen is the one you tend to use most in the early stages of the game. You can commit manpower and monetary resources to developing up to six different SDI systems - laser satellites, X-ray laser satellites, 'rail' guns, which use electro-magnetic pulses to fire chunks of metal. Satellite Launched Attack Missiles (SLAMS) which are like mini-rockets with lasers on board, space planes, a cross between the space shuttle and a jet fighter, and a battle management system which basically acts as an anti-ballistic missile screen.

Each of the different systems have different capabilities. Some are better against missiles than against warheads, some work best in deep space, others within the atmosphere and so on. You'll not be able to develop all six systems at the same time so you have to start making the difficult decisions right from the start.

The SDI screen is for controlling systems which you have built using the R&D screen. You can use espionage and reconnaissance to find our what the Soviets are up to. The threat screen gives you some idea of the state of 'international tension' and if the worst happens, and war starts then you'll be treated to a nice little graphics sequence showing little dots bleeping across the world. These are nuclear missiles, and you better start hoping that your systems are going to hold them off. The president will ask you whether you think you can stop bombs from falling on America; if you give the answer no, then he will launch the US counterstrike.

Unlike some games, where everybody loses once nuclear war has started. High Frontier is based on the idea that a nuclear war could be survivable. Your success at creating an efficient SDI system will decide how much of America has survived, and so your final score. A very dubious assumption, I'd have thought. The idea of anyone thinking conflict is acceptable is pretty frightening.

If you get tired of playing around with icons, then you can have a go at the arcade sequence which is built into the game. This lets you control one of the various types of weapons systems you have in orbit. You get a view from your satellite, just as the Russian missiles are launched. This is your chance to save a little bit more of America for posterity and it's an absolutely straight arcade zap in which you try to knock out as many missiles as possible. It may all seem complicated but High Frontier is actually quite simple to play once you've had a couple of tries, although not easy to win, not at first, anyway.

I'm not sure that I can say that I enjoyed High Frontier, the whole thing is a touch tasteless but it certainly had a sort of compulsive fascination. I have to admit that I was hooked.

Compulsive strategic simulation of the Star Wars defence system. Get it right and you save America. Is it worth it?

Compulsive strategic simulation of the Star Wars defence system. Get it right and you save America. Is it worth it?