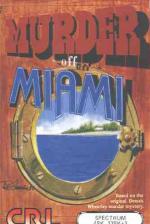 Murder off Miami is the latest product to flow from the fertile pen of Delta 4's Fergus McNeill and is being marketed by CRL. As with previous Fergus productions, the programming problems have been left in the capable hands of Gilsoft's authoring programmers, Quill and Illustrator.

Unlike our Fergy's most recent forays into adventure writing, Murder off Miami is not a pastiche, although it does owe its genesis to a book. The original was one of an interesting little series put together by thriller writer Dennis Wheatley (grandfather of Dominic, one of the creatures behind Eureka) back in the 1930s.

You got a large format book which was ostensibly a real police report of a murder investigation. In the book, you had all the memos, scrapes of paper and transcripts of interrogations plus all the clues - either in photographic form or in reality - hair, blood, bullets. There were even little plastic bags with cigarette ends and fibers from under corpses fingernails! You had to wade through this little lot and work out whodunnit. Anyone interested will soon be able to pick up a copy as the series is being republished in the summer.

The books were perfect for adventure games it's a surprise that nobody thought of computerising them before.

You play the part of Detective Kettering. You get the same evidence as contained in the book, although it's presented in different forms. Documents are shown as text on screen: objects are pictured - if you're bright enough to spot them.

So what's the crime? Bolitho Blane, British financier, get himself dead in mysterious circumstances while on a pleasure cruise off Miami, Florida - Miami Vice territory, only 50 years too early, so don't expect designer labels in this one.

You get a plan of the cabins on the yacht, showing where everybody was supposed to be at the fateful hour. Around the plan are pictures of the dramatis personae - people involved - in other words, the suspects.

You start off in your office on dry land. There are various objects you might want here, but don't stay too long or you're boss gets narked and fires you. Grab your magnifying glass, read the memo telling you of the suspected crime and cable somebody hands you, then get moving down to the docks to meet the returning holiday yacht.

Once you get on to the yacht all the suspects are gathered in the lounge. Quiz each of them using commands like ASK - SAY TO - or TELL.

The characters may answer, but as most of them are snooty old buffers, they all have their own strong personalities and will only telly you their stories, in reams of text, after some genteel persuasion. They may not tell lies but most stop a long way of telling all. You are advised to examine everything very carefully. And, as with games sporting similar plots, you can interrogate suspects and witnesses to find out why they know, by typing 'ask x about y'.

The text parser is a little limited but the plot is devious, as one would expect from a combination of Dennis Wheatley and Fergus. I think, though, that the spelling and grammar can only be blamed on Fergus - I'm sure Mr Wheatley knew how to spell 'scandalous' and it's not 'scandellous'.

Quibbles like that aside I suspect Murder Off Miami is going to be dragged into all the big line-ups pretty soon.

As for Fergus - book him, murder one (of the English Language)!

A compelling, if implausible, plot. Not one of Fergus' best but the poster's good fun and it'll take quite some solving.

A compelling, if implausible, plot. Not one of Fergus' best but the poster's good fun and it'll take quite some solving.