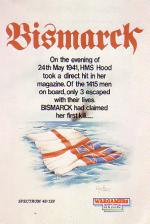 The Bismarck was a German 'pocket battleship' and during the second world war it had much the same effect on the British Navy as Freddy the Bogeyman has on assorted teenagers in Nightmare on Elm Street part whatever.

Not only did she (ships are always female for some reason - even those with butch names) raid convoys and send defenceless merchant ships to Davy Jones Locker, she also sank HMS Hood, the pride of the British fleet, which went to the bottom of the Atlantic with all but three of her 1,415 crew.

Now PSS's strategy game Bismarck gives you the chance to show just how the hunt for the Nazi commerce raider should have been conducted - or can you, as the Captain of the Bismarck, evade the Royal Navy, cut Britain's Atlantic lifeline, and escape to safety in Brest harbour?

There are two parts to the game. The first part, the search phase, involves you moving your ships around the map of the Atlantic, flying off your aircraft to look for the enemy, and basically waiting for the Bismarck (or the Prinz Eugen, the slightly smaller warship which accompanied it) to get spotted. Of course, if the Bismarck has been sighted, then the British navy will converge on her as fast as it can.

The map shows the Atlantic Ocean the North Sea and the English Channel. Marked on it are Scandinavia, the British Isles, Iceland, a bit of Greenland, and the North West coast of France. Dotted about this area are the various ships and groups of ships which are at the players' disposal. These are shown as squares, about a character to a side. The Bismarck is a black cross on a white background, while the various British ship types - destroyers, cruisers, battleships, aircraft carriers and convoys - are represented by different symbols. The game uses "hidden movement" so if you're playing the Germans, the only units on screen will be the Bismarck and Prim Eugen, and any British ships they can see. With the British, it's vice versa - you'll see the pride of the Royal Navy, about a dozen symbols, but no Germans unless you've spotted them.

Also on the map are various strange little symbols - wind socks, clouds, flags and anchors. The wind socks represent the air search capability each player has - move your command box over wind sock, hit Fire, and the areas your planes are covering at present will be highlighted and any enemy ships they can see will be shown. The cloud symbol represents the players' metereological experts. The flags are the respective headquarters - you sometimes get message from them - and the anchors are the various naval bases on the board.

Movement is simple - use the cursor keys to put the command box (an open white square) over the ship to move, hit Fire, move the cursor to wherever you want the ship to go to, hit Fire again, and off they go.

If movement is simple, combat isn't. In fact, it's so complex, that you'd be well advised to take advantage of the 'training programs' option.

When one of your fleet contacts an enemy vessel you become captain of that ship. The screen changes from the map to a sort of control panel/view from the bridge. The top part of the screen is what you can see from the bridge. Lots of sea, with the odd silhouette of an enemy battleship dotted around. The bottom part of the screen has a series of icons on it. By using the cursor keys to highlight the icon you want, you can order your ship to run away, charge, or maintain your distance, in non technical terms. Other icons control which way you're looking, and the weaponry the various types of ships have - guns for battleships, torpedos on destroyers, and planes on aircraft carriers.

Everything's done in an almost-arcade-but-not-quite- exactly style. The enemy ship appears on your radar screen, you get it in your gun sights, then you fire off a salvo of shells or a brace of torpedos and try to avoid enemy fire and so on. The problem is that it's not easy to switch from one activity to another quickly, as you have to keep accessing the different icons all the time.

I got blown out of the water on two occasions while I was still trying to work out how to stop firing my guns and run away - but then I was attacking the Bismarck with a measly little destroyer, which I understand may not be such a good idea.

There's certainly enough action in Bismarck. I don't know if you can call it a true wargame but, what the hell!

Tense and exciting blend of strategy and arcade simulation - a long way from playing Battleships!

Tense and exciting blend of strategy and arcade simulation - a long way from playing Battleships!