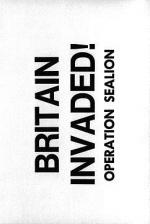 Operation Sealion never took place, but both the German army, the Wehrmacht, and the German navy spent considerable time preparing plans for just how Britain should be invaded, although in fact the two disagreed fairly fundamentally over the best methods.

Those plans were never used, but there is an abiding fascination with the question of just what would have happened had the Germans tried.

A number of books have been written on the subject, and at least one board wargame (Seelowe, by SPI).

After initial German successes on land, the Royal Navy swept through the Channel and destroyed the German navy and transport vessels. The German invasion force was isolated and eventually surrendered. The general consensus of opinion among all parties concerned was that this is what would most probably have happened.

Britain invaded sets certain premises before the game begins. Both the the RAF and the Royal Navy have been effectively destroyed, so there is no opposition to the German landings in Britain. As a result, units have come ashore on a wide front, all the way along the South coast from Dorset to East Anglia. To resist them there are a few scattered British units on the coast, with more inland.

And unfortunately for the British commander, his units can't move until they're alerted: units are alerted either on a random chance or if a German unit attacks them.

The map is large, stretching from the Bristol Channel to the North Sea, and up as far as the Midlands. It scrolls quite nicely, too. On it are marked cities, ports, forests and so on, and. more importantly for the British player, railway lines.

The British have infantry divisions and armoured brigades, and the Germans have infantry divisions, armoured brigades and Panzer divisions. The German units move faster and are tougher in combat. To compensate slightly, the British player can move his units by rail, up to 10 squares - but they can't attack in the same turn. Plus, if a German units moves through a square with a railway line in it, the track is destroyed.

The Germans win either by controlling London or by getting hold of so many ports that they can flood units into the country. The British player has to try and destroy enemy units, contain the invasion and recapture ports.

When I played, I did really well in parts, and was launching a successful counter attack in Dorset and East Anglia. I recaptured three or four ports in about the same number of turns.

Unfortunately, the Nazi jackboot was rampaging through Kent and Sussex and London fell pretty quickly.

The best of the four TK wargames, with plenty of room to manouevre. Nice feel and a good map.

The best of the four TK wargames, with plenty of room to manoeuvre. Nice feel and a good map.