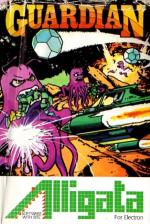 No this is not a game about publishing a left-of-centre quality daily newspaper, but a fast action kill-everything-in-sight game. It's the classic Defender game, bearing a marked resemblance to Acornsoft's Planetoid, and it's very good.

The sideways scrolling is remarkably smooth and the action without respite. You pilot your space fighter back and forth across the landscape desperately trying to stop the landers (green bulbous creatures) from getting to the planet surface and carrying off the humanoids - which look nothing like the humans I know.

The score and number of spaceships left (three per game) plus the number of smart bombs left (three per go) are displayed above the action. Also above the game action itself is the space scanner which gives a wider view of your position and that of the landers, flying pods, swarmers, alien bombers and deadly baiters. It's fairly difficult to distinguish which is which but these particular nasties are fast around the screen and preferably avoided. This is where the scanner can help but keeping an eye on the main screen is difficult enough.

Keyboard controls are probably the optimum combination but it is a shame that joystick control is not a feature of the game. Even commercial joystick converters don't seem to work, presumably being overwritten by the game code. It is an art in itself juggling with thrust, reverse, fire, smart bombs and so on. Still I suppose the addicts have been at it long enough by now with other similar games and it's part of the challenge to the newcomer. Electron owners will be especially pleased that such an excellent game runs fast and true on their machine.

The graphics are not stunning in detail but this is a sacrifice which allows for increased speed and smoothness of action. Sound is excellently used. I don't know how programmers manage to come up with so many variations on the laser gun 'noise' but here is another convincing version. Guardian is a version of a classic game classicly implemented. If you haven't already got something like it then Alligata's polished version will provide you with many happy hours polishing off the alien landers.

Will provide you with many happy hours polishing off the alien landers.