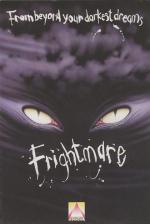 The longer you dream, the worse it gets... no. It's not an SU editorial lunch, it's Frightmare, Cascade's latest bid to disprove the, "one-game company," tag.

Since the success of A.C.E. and A.C.E.2, Cascade has decided to adopt a higher profile and bring out a wide variety of games titles. I'm not sure if Frightmare is the best game to start with though, 'cos, let's face it, guys, it's basically a cross between a platforms-and-ladders game and Ghosts 'n' Goblins. And the big question is: Can you make it through from 12 midnight to 8.30, surviving assaults from the deepest darkest demons of your subconscious, without going bonkers?

There are four dream zones to play through (each with many screens) ) and each time you enter a new screen, the clock ticks off an extra a six minutes. The screens, consisting of the usual platforms, pillars, ruined buildings and plants, are haunted by all the mythical ghoulies of legend and history; vampires, werewolves, medusas, severed hands, zombies, mummies and swamp things. Of course, hidden throughout the screens are weapons which can be used to kill off various monsters; holy water kills practically anything; watches slow them down; crucifixes freeze zombies, demons, serpents and various other offspring of evil; and many of the less powerful monsters are vulnerable to ordinary bullets shot from the revolver. If you find another revolver, it doubles your rate of fire.

There's also a single silver revolver, which is the only weapon which will destroy zombies, werewolves, and Satan. Well it would wouldn't it? You can collect several weapons, and switch between them using the inventory at the bottom of the screen.

As you leap around the screens, other icons will also help you out; rings give an extra life, wings increase the size of your jumps, a transporter moves you across the screen, and a chalice increases your dream state rating. This rating varies from BAD DREAM to NEFARIOUS FRIGHTMARE (which is the height of scariness). The pairs of nouns and adjectives change as you score more points by shooting monsters, picking chalices and using weapons.

Now you might have noticed that this isn't the most exciting review in this month's issue, or indeed for several months' issues. The reason for this being that it's always difficult to whip up any enthusiasm for a game which is perfectly competently programmed, has pretty graphics and lots of gameplay, but not one jot of originality and no outstanding gimmicks. The most frightening thing about Frightmare is the price; it's certainly way better than the average budget game, but for £9.99 I certainly expect at least originality, excitement and, dare I say it? Superlative quality. Frightmare, sad to say, doesn't have it.