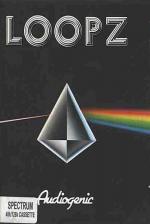 Abstract game concepts give me a bit of a problem. If it's not got a smart bomb, if it's not an extra life at 10,000 and pressing fire doesn't unleash untold screaming bolts of laser death, then I'm left more than a little dazed and confused. (So what's new Phil?)

Well that's my excuse tor sitting in front of the SU Speccy for the first half an hour and trying sixty billion key combinations to get some sort of laser blast whizzing across the screen.

As with all puzzle games that are worth more than a tuppence h'appeny of your lolly, the basic precept is incredibly simple. All you have to do is make loops. Using the input device of your choice (joystick, keyboard or ESP), the idea is to guide bits of stuff comprising of simple blocks around the screen and drop them where they can link up with your previously dropped bits to make up loops. When a loop gets made it gets removed from the play area giving you back some room to make more loops. Sounds easy? Probably exactly what the government though about the poll tax.

if that was all that there was to it then yes, it would be very easy but each block must be dropped within a time limit shown by the timer bar along the bottom of the screen. Take too long and you'll lose a life. Also, the amount of time to drop a block (oo-er) gets less and less the better you become, making for huge adrenalin rushes on the later levels. If the screen gets cluttered up and then you may get a gopher piece which'll zap away any tracks you've made that can't be looped up but the game is a little bit stingy with these.

Also designed to mangle your gray matter into contorted Monster Munch-like shapes is Game C, a puzzle section consisting of fifty conundrums to get you bashing seven shades out of your Speccy. Each puzzle consists of a loop made up from the normal game pieces. After the loop's flashed up onto the screen, bits and bobs of it are removed one by one leaving you to replace all the stuff back where it came from. As you traverse the 50 screens the pace hots up bit by bit until by screen 50 you have to go like the proverbial clappers.

Puzzle games, usually the only puzzle associated with this genre is "Why did I bother buying this load of old trout?" Well. Much as kind words cause stabbing pains in my larynx, Loopz is what Cyril would term a Nice one'.

Loopz manages to offer oodles of gameplay and a fair bit of tension. Well worth a delve info your pockets.

Loopz manages to offer oodles of gameplay and a fair bit of tension. Well worth a delve info your pockets.