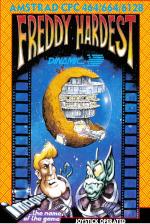 After a bit of a party, Freddy is a little tipsy due to drinking excessively. As a result, he bumps into a meteorite and crash-lands on the surface of a moon of the planet of Ternat - let that be a lesson to drink drivers everywhere! Ternat is the site of the alien base Kaldar and the aliens don't really like Freddy being there. As a result of the crash, his ship is totally written off - so he sets off to find one to steal.

There are two parts to the game and these are loaded separately. An access code is needed to enter part two and this is obtained on completing level one.

The first part involves Freddy's attempt to reach the alien base. The surface of the moon is cratered and occupied by a variety of alien life forms, who could do with a snack about now - and guess who's coming to dinner? You can attack by two methods: a laser pistol and a flying kick.

The aliens are Avoidois, Antoids, Watching robots, Koptos and Snakkers. Avoidois are small and you can not kick low enough to hit them, so a bolt from the laser is the best thing to do. Watching robots fly across the surface and these have to be disabled with a flying kick. The other three can be despatched by a flying kick or a shot. If any alien touches you then one of your five lives is lost.

Bubbling craters appear in the landscape and it's not advisable to try to go swimming in them. Large tube-like craters spit out globules of liquid which form into an alien on hitting the surface of the planet. Occasionally large gaps appear in the surface which you must leap across. The longer that you keep the joystick pushed up, the further you can jump. Eventually you'll reach the entrance to the alien base and all you have to do is jump into it.

Once inside the alien base you have several tasks to complete. There are a choice of four space ships which you can "borrow", and the captain's code is needed to use the ships. You only need the code to one ship. Nuclear fuel cells need to be collected and put in the ship to fuel it. The instructions for the jump to hyperspace also need to be found.

In the lower part of the screen is your status panel showing lives, nuclear fuel cells, messages and score. The playing area shows two levels at a time, the one you are on and the one above or below you. The different levels are moved between by use of fireman's poles and lifts.

The alien base is occupied by three types of creature. Micro sounders, Gabarda robots and Inhabitants. Micro sounders fly around the top of the screen and can only be destroyed by a flying kick. Gabarda robots hover around on jet packs and these can be shot or kicked to death. The Inhabitants are immune to laser fire and so you must use your martial arts skills on them. They too can do martial arts and so there is simple combat phase.

Sixteen computer terminals are spread around the base and these hold the captain's codes and hyperspace instructions. Once you have all of the relevant information for one of the ships, all you have to do is get to the hangar and make your escape.

The graphics of Freddy and the aliens are all well-animated and colourful, and the scenery on part one scrolls smoothly. The second game is a little too colourful with the scenery distracting you from the game. The sound effects are explosively rewarding and there is a reasonable title tune.

Dinamic's previous efforts have been graphically excellent, but with gameplay problems. This time they've got things right although I suspect it's more a case of the guys at Ocean/Imagine telling them exactly how to tweak the difficulty level. The graphics, animation and scrolling are once more superb. Part one is a very addictive shoot-'em-up and part two provides plenty of exploratory challenge.

Both parts are clear and playable.

Grab Factor 89%
P. Zapping and lucking your way around is fun
N. First part can be frustrating

Overall 88%
P. Once completed, you may not play it again.
P. Two good games for the price of one.

First part can be frustrating. Second part will keep you occupied longer.