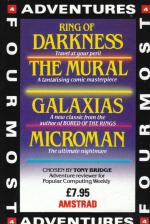 Here's a refreshing approach to marketing adventures by Global Software, who seem to have been much in evidence in this column recently with their imminent release of Old Scores by Pete Green.

Fourmost Adventures is endorsed by Tony Bridge of Popular Computing Weekly and I can just about get over my professional pride and say that Mr Bridge would appear to know a good game when he sees one.

There are four games in the package, which sells for £7.95 on cassette. There'll be a disc-version as well (price unannounced) and at an average of £2.00 each that makes a real bargain - particularly since one of the games is really very good indeed and the collection also includes Wintersoft's excellent Ring Of Darkness. Let's take a look at each offering in turn...

The Mural is a "Quilled" monstrosity that reminded me of some of the earlier Artic Computing games on the Spectrum, but written by someone who appears to have a serious mental problem coupled with a fiendish sense of humour.

Just in case the reputation of Artic leaves you cold, let me explain that Artic had a reputation for producing games that were very difficult to solve. The Mural certainly fails into this category and I was very definitely in need of a clue-sheet at several stages of his endevaours. Luckily I had one to hand - otherwise this review would have been a bit on the short side.

The basic plot (if such is the right word for this collection of improbabilities) of The Mural is perfectly straightforward - go forth into the world, find an obscene mural, and paint over it to preserve public decency. The game is Quilled and text-only with a reasonable vocabulary and the location descriptions are lengthy and detailed.

They are also fiendishly difficult to get out of, and for reasons which cannot in the least be considered either logical or - in some cases - comprehensible. For example, go North from the first location and thou shalt never return (at least not without a great deal of difficulty) because a large penguin falls from nowhere and blocks your exit.

Other locations are even worse for your health. Outside a pillar box, located in the middle of a cornfield, you will find, should you foolishly type IN, that for no apparent reason you have shrunk to the size of a mouse, slipped into the box, and been forced to restart the game rather than wait for the Post Office to retrieve you.

Since I had a clue-sheet, I can tell you that there is a way through all these problems, but whether you'll find it or not without such assistance I strongly doubt - at least not without tearing out many handfuls of hair. This may of course be just what you iook for in a game, but I tend to be a bit more of an atmosphere and fantasy man than a fiendish puzzle and outrageous logic fanatic.

In fact, The Mural reminded me slightly of The Quest For The Holy Grail, a truly appalling game that killed you off for no better reason than that you happened to fall foul of a gob-spitting guard or an exploding rabbit - very funny the first time but dull as dishwater after a few hours. The Mural is of an immeasurably higher standard than that holy tripe, but I still advise you to steer clear of it if you are of a logical disposition.

Now this is something of a rarity, this one. Quilled games can sometimes make you wonder just how much of a good thing it is to have every Tom, Dick and Harry churning out byte after byte of insipid drivel, but Microman is an excellently designed little gem with considerable atmosphere and some very originally-conceived locations.

As Prof Neil Richards you have unfortunately been reduced to a mere three inches or so in size, and you must escape from your car (in which this hideous transformation has taken place) and attempt to regain your former stature.

It's a tribute to the game - both its challenge and its atmosphere - that after a few minutes, I really felt three inches tall. Cynics might say that I'm not much taller than that anyway, but believe me it is a humbling experience to get lost inside a haystack as I did just a few moves after leaving my car.

The game is full of nice touches, from the moment you rob a magpie's nest through a life-and-death battle with a mole to your final struggles in the laboratory to solve the conundrum of your much-reduced stature.

To heighten the atmosphere, the game has several attractive graphics. The programmer obviously isn't an artist but his illustrations are tidy, nicely presented, and help give the game just that little bit extra that makes it something special. A game I would thoroughly recommend even if it was being offered on its own let alone as part of bargain package.

I've already reviewed this Wintersoft offering. It's one of the few graphics-based role-playing games for the Amstrad and is an excellent example of the hit-points and combat-routine genre, though it is quite an ancient offering having originally appeared on the Dragon 32 computer sometime back in 1981. Suffice it to say that it was well worth the asking price all on its own - and must go a long way to establishing this Global compilation as excellent value for money.

Galaxias is yet another space adventure (as you might guess from the title) but after hearing from Global that it was programmed by the same gent who produced Bored Of The Rings (something of a classic by Quilled standards) I was prepared for something above the average, even if the scenario didn't look too promising.

I wasn't disappointed either. First, this is an unusually large Quilled game - most "Quillers" run out of space after about eighty locations but Galaxias runs to just over ninety. What's more, the programmer has adopted the sensible design tactic of splitting the game into several component parts, with each set of locations having its own atmosphere and identity.

Although the notes on the copy I had didn't make it plain what the aim of the game was, I gather that the objective is to retrieve a valuable crystal from a security vault on the planet Zagro. On the way you take in Akrol, Graflon and Septula; leading you to hope that if ever space exploration really takes off someone will be able to come up with more attractive names for the places they visit.

What puzzles there are are extremely logical, but the strength of the game lies in the design of the map which has a satisfying number of interesting (though not necessarily important) locations to explore. There are also some graphics which, while not of the highest standard, do make something of a difference - though I was unable find the command to redraw them once I'd snapped over to the text-screen to input my commands.

Galaxias buffers slightly in my opinion by belonging to a category of game in which it is very difficult to be both original and of high quality. I'm told that it is in fact quite an old game (though not previously published) and this I can well believe - many of us have a small universe of our own making lying around on tape somewhere and space adventures tend to be the first to suggest themselves to people just starting programming. Nevertheless, it far surpasses the Vidipix game reviewed elsewhere in this issue, and must therefore rate as good value for money when included in a collection like this one.

It's not often that you get four games in one for this sort of price. There's no doubt in my mind that The Mural is the weakest offering on this tape, but I'm fairly certain that even that game (difficult though it is) will find a few fans. The Ring Of Darkness is obviously a snip at this price, and Microman is a very enjoyable discovery. Add all these together, drop in a bit of space exploration, and you've got a package that simply cries out for your cash.

A package that simply cries out for your cash.
Logout