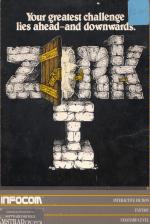 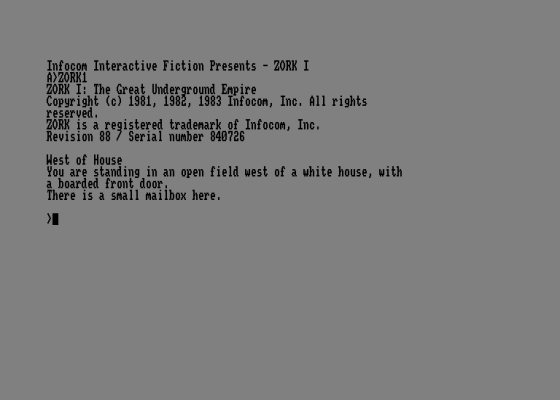 This famous trilogy comprised Infocom's first three games. They were smash hits from the start and are still very high in the US charts. Softsel are only releasing the first game initially but don't be disheartened. It's a classic in its own right and the other games in the trilogy are bound to follow sooner or later.

Zork is a close relative of Colossal Adventure in many respects. It starts you off outside an old house and once you've got inside, you'll find a lantern and a sword - both essential for your underground wanderings. You'll also find, provided you persevere, an entrance to the Underground Empire complete with trolls, kleptomaniacs, and wizardry of all descriptions.

Zork, like any successful game, has spawned a mythology all of its own. Foremost amongst these is Frobozz, a magical foundation who are consistently churning out new devices for magicians young and old to use in their daily business.

This subculture is admirably resurrected in a later Infocom game, Sorcerer, probably one of the best magical adventures of all times and definitely worth harassing Softsel for in the hope that they will release it for the Amstrad.

Zork, like Colossal, involves collecting treasures. There are twenty lying around, but actually getting them back to the trophy case provided is extremely difficult. One of them, the dreaded Egg, is really a very elaborate red herring and you should be extremely careful how you deal with it! Others will only find their way to the trophy case via someone else (who may well take them without asking). As in Colossal, finding treasures isn't even half the battle - it's stashing them away that counts.

Zork is, however, beginning to show its age a bit. It has a smaller vocabulary than some of the more recent cassette-based games - Lord Of The Rings and The Worm In Paradise, for example - and there is also very little character interaction worth talking about. However, as with all Infocom games, the quality of design and the vividness of the location descriptions makes this a true adventure classic. This is indeed a pilgrimage for every Pilgrim, and even at £19.95, it's worth every penny.

As with all Infocom games, the quality of design and the vividness of the location descriptions makes this a true adventure classic.