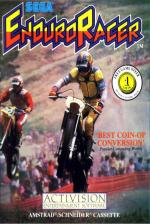 Activision has been absent from the software charts for some time but looks set to re-emerge as a force in the industry. This arcade conversion is already a success on other formats and should keep most racing-game fans happy.

It's another motorbike-racing game - at the moment they seem to be as popular as Breakout clones. You have to drive through five stages of dangerous roads on a bike with large tread on its tyres and great resilience in its shock-absorbers.

Each of the five stages has different obstacles and a time limit. You must complete each in order to progress on to the next stage - you charge straight into the next with no breather.

The roadway is very convincing. It races toward you. You can see bends and obstacles coming; they don't just appear from nowhere. There are even humps in the road which change the whole perspective when you drive over them. Combine this with the responsiveness of the bike and you've got a game with an excellent "feel" to it.

The first stage is set in a forest, where the course is lined with trees. The second stage is a desert, the third a swamp, the fourth another desert and the fifth a snowy road. The courses have many bends of varying seventy. When the rider leans right over, he scrapes one foot along the ground.

At intervals, what looks like a brick wall will loom in front of you... Don't panic. Just pull a wheelie and go sailing over it and anything else on the other side. Getting maximum speed over the jumps and not flying off to the side are the major skills you have to learn.

Apart from the jumps, you should steer clear of other objects. You will be bumped off course and slowed down by other riders, rocks and the like, but hit something big or land on a rock and you'll get thrown off. This loses valuable time and should be avoided at all costs.

The graphics are detailed and there are some good animation sequences for jumping and crashes. There are even effects on the desert and water stages where dust and water fly off the back wheel. The first stage is relatively easy, but from there on it gets tough. Practice is the key to success - you must learn how to take the jumps correctly.

I found the game easy to play and surprisingly addictive. It's got a good feel to it and, although it doesn't score highly on its originality or use of colour, I think you'll find it a very enjoyable challenge.

The graphics are rather a sore point on Enduro Racer - single-coloured and often lacking in depth. However, good animation and addictive gameplay make up for it. Tough to begin with, but once you know the circuits it shouldn't pose too much trouble. An average game.

Overall 79% P. An excellent conversion.
N. Unoriginality and lack of colour are disappointing.

An average game... It's tough to begin with, but once you know the circuits it shouldn't pose too much trouble.