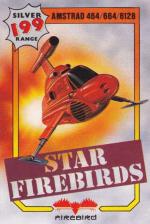 Originally released by Insight at a price of £7.95, this game has quickly made its way into the ranks of budget games where it rightly belongs. It's a simple shoot-'em-up similar to many others on the Amstrad, but you've only got to shell out a few pennies for it.

The familiar scenario involves a laser base at the bottom of the screen that you control to blast away at several types of alien birdie things flying down the screen. There are two common types of bird that whizz around screen in curving patterns; one of which shoots single bullets, while the other shoots a scatter of them. These are dealt with by a single shot.

Bombs come in from the top of the screen and slowly descend, but when shot they explode into dangerous fragments. The last and toughest of the adversaries is a big bird that has to be hit several times before it dies.

If the base gets into real trouble it can 'warp' a limited number of times. Warping causes it to move automatically up screen while invulnerable to the birds which you can kill on the way. When it goes off the top it reappears at the bottom of the screen, and you need to be ready so that it doesn't reappear in a hail of enemy fire.

The graphics are very colourful and move at a reasonably challenging pace. There is little variety in the bird's action and mostly it's just a matter of blasting away with a tiring finger at the same old formations. It's only £2 so you could do worse if you're looking for a mindless blast.

Great blast for a couple of minutes, but there are none of the tough patterns that these left-right-fires really need. Fun, and graphically quite appealing - but where's the staying power?

Great in the arcades a few years ago, but wearing a bit thin now. It's a good version though and not exactly expensive at £1.99.

N. Not many varieties of alien.
N. Little change in movement patterns.
N. Completely and utterly mindless (or is that Good News?)

No problems here (except for those damned birds!)

Fun, and graphically quite appealing - but where's the staying power?