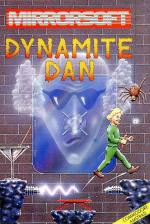 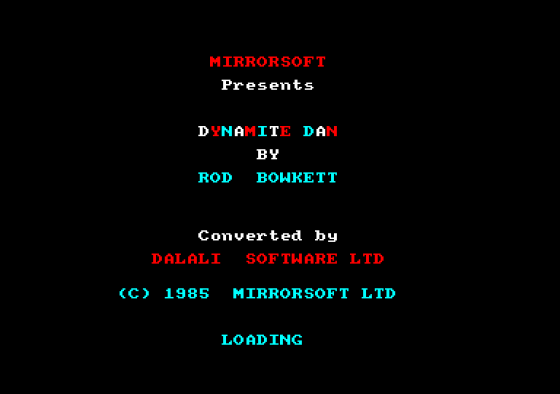 The hero of the title is another plump, lovable computer character involved in a colourful and demanding platform game. His task is to collect eight sticks of dynamite and blow open the safe of the evil Dr Blitzen, get the plans for the Mega-Ray and escape in a zeppelin. The plot may not be credible but the game is terrific.

Dan stands in his zeppelin above Blitzen's 48 screen, clifftop fortress and has to jump down and start dealing with the hordes of dangers that face him. There are lots of non-moving objects that can be picked up for energy, points and different uses - but also many moving nasties that lose you a life when run into.

Running into the creatures loses Dan one of his ten lives, leaving him to continue from that position. But a bigger danger awaits at the bottom of the cliff - the sea! If Dan falls into it, the game ends immediately unless he is carrying the right object or lands on the raft that floats across the water. Other long falls can also lose Dan a single life in the same way as running into creatures. The creatures come in a wonderful variety of colourful, well-animated types that follow movement patterns vertically or horizontally. Getting past them is all a matter of planning a route and having good timing. 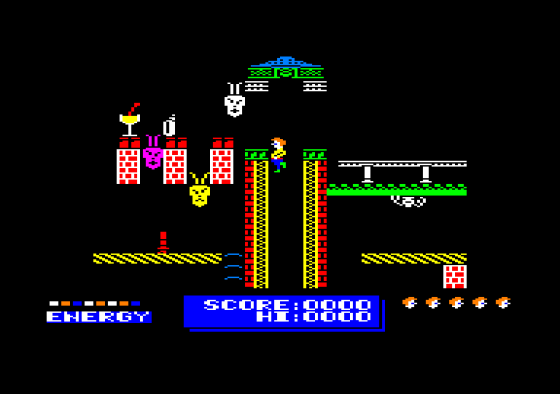 You can move about screen by several methods, the simplest of which are the familiar walking and jumping. Teleports are sometimes found and transport you between two locations. Red trampolines and elastic ropes can be used for bouncing on so that Dan can gain great height straight up or for diagonal leaps across gaps or dangers. When going between screens you must be careful, as they flick to reveal the new one this can leave you leaping into thin air if you don't know the screen layout. There is even a central lift which is handy for getting between levels, but can be dangerous if you fall down the empty shaft.

As Dan moves about, he uses energy which has to be replenished with constant supplies of food. This is found lying about all over the place in the form of cups of tea, ice cream, cake, fruit and other goodies. It isn't replaced, though, thus putting a limit on how long the game can go on.

The dynamite is randomly placed about the playing area, although it tends to appear in the same general locations. The other useful objects also appear randomly and have various uses like invulnerability and extra lives. These should help you to your objective which is a safe guarded by Blitzen and containing plans which you have to collect and get back to your zeppelin.

The game is going to be exceptionally difficult to complete with the random elements and its sheer overwhelming number of adversaries. However it's a great one for working out routes and timings, just like a good platform game should be.

No, not really a shred of originality to be found in this game. Just excellent graphics, tough gameplay and a challenge that's likely to be long-term. It has to be the best game of its kind so far on the Amstrad.

Unlike many other games of this ilk, I didn't find the jumping presented too many problems. What usually got me was the sheer volume and craziness of the Blitzen's guards. Apart from the usual platform-game jokes such as snapping toilets - there was a host of clever and colourful opponents.

N. Not a highly original game type.
N. Dying in that water can get very frustrating.

Apart from the usual platform-game jokes such as snapping toilets, there was a host of clever and colourful opponents. 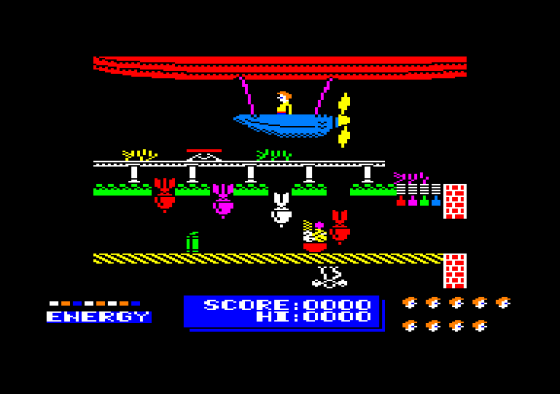 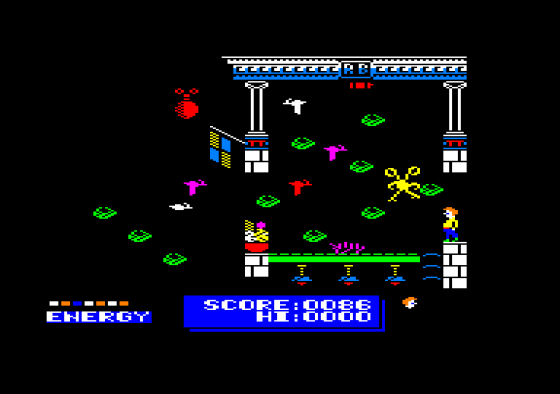