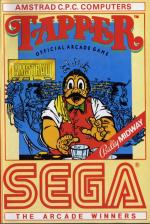 It's a long while since I played this game in the arcades but the Amstrad conversion is finally here. It puts you in the role of a barman having to serve an ever-increasing number of customers. Any mistakes and you'll soon find the management booting you out - efficiency and speed are the name of the game.

The screen shows four bars, perspective making the top one the shortest and the bottom one the longest. At the end of each bar is a doorway through which customers pour. You're at the other end of the bar where the drinks have to be poured. You can move up and down between the bars and also run down them.

The aim is to force all the customers back out of the doors. Every time you throw a drink down the bar at them it forces them back - out of the door you hope. They'll be back for more, though. If you don't get them out of the door they'll also return the empty glass, which you have to catch. Smash a glass and you've had it, so bunging a beer down an empty bar will also prove fatal.

If customers reach your end of the bar it will prove a bruising experience: they throw you down it like one of your beers. However, they will occasionally leave tips. Collect one of these and dancing girls will come on to take their minds off the booze, giving you a breathing space.

If you clear a bar you move on to one with more customers. On the later levels, two bars will be the opposite way around to the usual, which can prove confusing. The clientele changes as well, from the western saloon and sports fans to the punk and space bars. In between bars is a bonus stage requiring sharp eyesight

The graphics are delightful and the gameplay frantic. The problem is that the game is too slow until you practically clear the bar, and then it speeds up too much. Apart from this speed problem it's an enjoyable challenge

It is a surprise to see Tapper on the CPC. I would have thought Amsoft would have delighted in releasing it two years ago rather than leaving it this late.

It's not a bad conversion from the arcade original: others, you'll be pleased to know, have fared much worse. Chunky graphics which tend to slow down when there's a screenful of action spoil the fun somewhat. And seeing all that beer flying around makes one very thirsty.

Causes the thirst glands to operate, even in green.

Get to sports bar.

Graphics 73% P. Delightful characters in all bars. N. Things really slow down with lots on screen.

Grab Factor 76% P. Needs quick reactions and thinking. P. You can be fighting to complete a bar for a long time.

A decent arcade conversion... though chunky graphics which tend to slow down when there's a screenful of action spoil the fun somewhat.