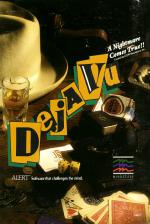 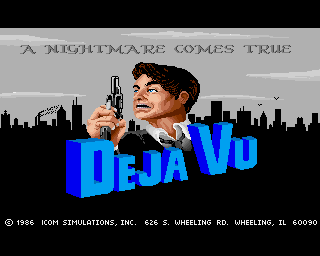 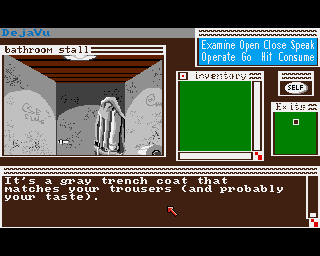 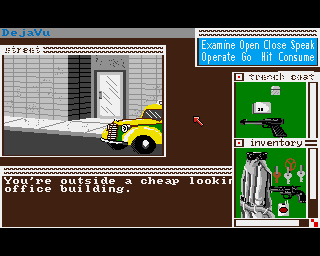 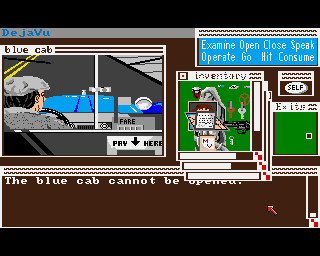 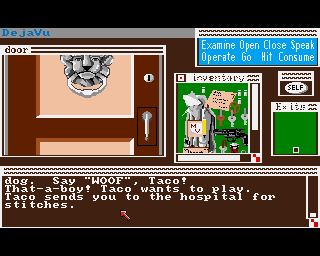 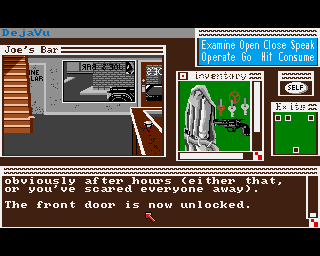 Feeling dead rough, and suffering a total loss of memory, you come to in the gents' cubicle at Joe's Bar. You have marks on your arm that may have been caused by injections...

Struggling out of the room, you find it is night-time. You are weak and trembling, and must urgently do something about your condition - but what? Joe's Bar is locked up, and there is no easy way out of the building. Exploring, you soon find evidence of drugs which may have been administered to you, and also a body. With a few clues you've picked up on the way, you are soon outside, and working on discovering your identity. Of course, you'll want to solve the murder too (Did *you* do it?) and violent muggers and sewer alligators, are among the hazards you'll have to contend with!

Deja Vu is not a new adventure, it has been around for a year or so, originally for the Macintosh. Since then, it has spread its wings, and migrated to other machines, among them, the Commodore 64 - which is the version I played.

Deja Ju takes the optional icon format of adventures such as Borrowed Time and Tass Times a lot further. You can forget typing text - the whole game, with very minor exceptions, is played entirely by joystick or mouse. This does mean that it has a very limited 'vocabulary'.

To select the required verb, the mouse-type arrow is moved to the appropriate icon, and the fire button is pressed. An object is selected in the same way, but instead of from a set of word icons, the display in the graphics window, the inventory window, is used. A contents window shows whatever is inside something when it has been opened, and appears superimposed over part of the main graphics.

Since not all the exits are visible in the graphic (there may be a way out behind you) an Exits window is provided, showing the disposition of all the currently available exits in plan view.

Deja Vu is not exempt from illogical commands - a fault so often found in text adventures. I was playing away quite happily when I happened to miss the (glass) wintow I intended to open, and clicked on the corpse lying next to it, by mistake. Imagine my surprise when the corpse actually opened, and something quite useful inside was revealed! I suspected that what I was really doing was opening his pocket - yet when I eventually finished this grisly task, I got the message "The corpse is now closed" clearly enough!

Overall, this makes a quite novel adventure, although personally I would have felt happier typing in real text commands, and it would have been faster.