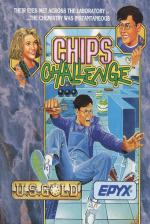 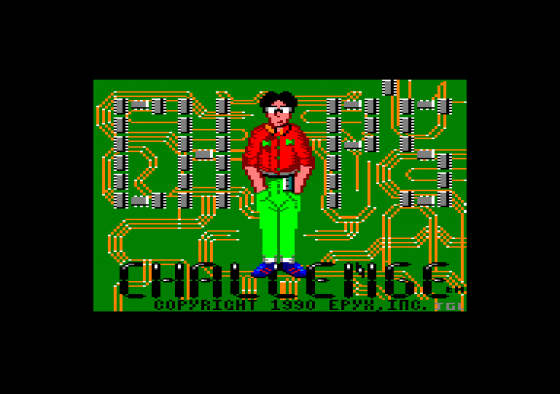 Chip is a nerd. He's a gangly bespectacled youth, and has no chance with Melinda, the best looking girl in the class. But, if he can prove himself... if he can complete the challenge... then maybe people will see him in a different light...

Melinda has told Chip that he can join her computer club - the Bit Busters - on one condition: first, he must make his way through 144 tortuous levels on a hunt for missing microchips: that's Chip's Challenge.

It's a bit tight, really, 'cos the levels are infested with marauding monsters, terrible traps and dozens of dangers. But Chip fancies her like mad, so he's up for the task. 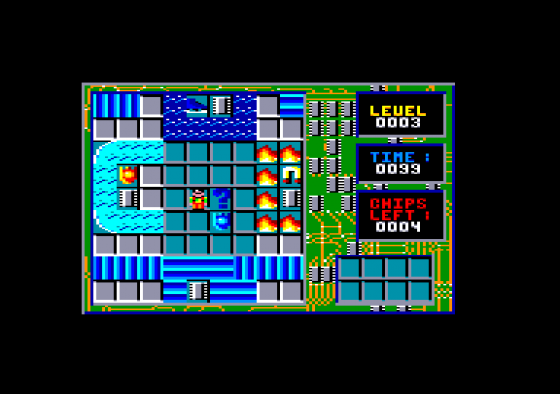 Chip has to collect a number of silicon chips that have been scattered around each level, then find the portal to escape to the next one. It isn't as easy as it sounds, though. The game world is constructed from a variety of blocks, doors and surfaces. Chip has to learn how to interact with all these, and figure out the puzzles.

Normally, the floors are made up from metallic tiles. However, it could be that you have to negotiate ice (causing you to slip), conveyor belts that propel you along with little control of your destiny, or worse.

There are plenty of objects to help you out on your journey, though. A pair of cleats will let you walk across the ice without slipping uncontrollably. And a fire suit allows flames to be walked through without harm. 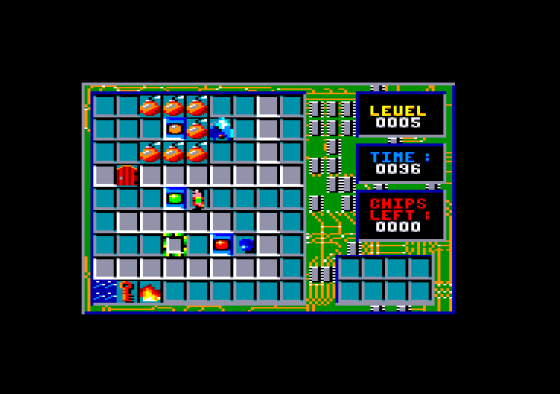 Other things that help you on your way include keys to get through the colour-coded doors, and blocks which can be pushed around to form bridges, or which may be hiding yet more useful collectables. All these components are laid out in such a way to produce a huge variety of puzzlers that'll make your brains explode. [Yuk! - Ed]

There are a few features that are missing here that you'd expect to find in more conventional games. They make sense, too. There's no score, for a start, and who needs one? The game is played to get further and further through the levels, not to tot up points. And the usual lives counter is missing. If you get killed, you simply start again. You can replay the same level over and over again until you turn the computer off. On subsequent plays, you can get right back to where you last got to, as each of the levels has a password for instant access.

Some of the levels are huge - many times larger than the screen - and the computer has to update lots of things while the game plays. As a result, the game runs slowly - noticeably so on the more complicated levels. This is a shame, as many of the puzzles require several similar steps to be repeated. The sluggish pace makes this a tedious process.

The graphics are very colourful. They're rather blocky, though, and it's hard to make out what some of the objects are. This does allow for a large amount to be displayed in a relatively small area - the world of Chip's Challenge is viewed through a scrolling window that moves to keep up with Chip's progress.

Chip's Challenge is an incredibly addictive puzzler. The large number of objects used in the game means that a staggering variety of puzzles have been created, each, on the whole, very different from the others.

The slow speed that the game runs at is disappointing, however. Fortunately, this is not fatal. The puzzles are just too addictive for that, and it really is impossible to tear yourself away. Besides, if you do solve all 144 puzzles, who knows what you and Melinda will be getting up to...! [That's enough of that! - Ed]

Having played this first on Atari's Lynx handheld, I was more than pleased to see that most of the levels and features of this excellent puzzle had been transferred to the Amstrad version, even if the graphics are a little confusing at times.

Graphics 67%
Colourful, but small and blocky graphics that move slowly.

Grab Factor 99%
The 'learner levels' get you into the game painlessly.

Staying Power 84%
144 tough and challenging levels will keep you going for ages!

Classic puzzle action that oozes with gameplay... 144 tough and challenging levels will keep you going for ages! 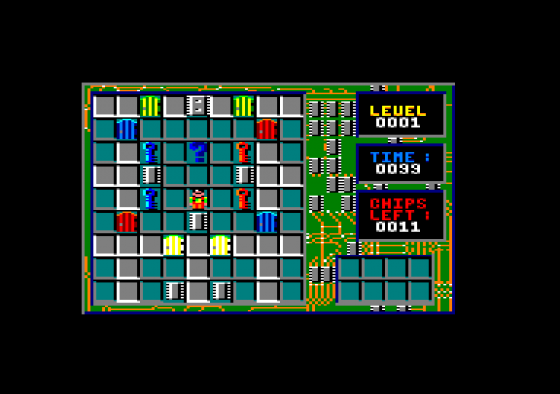