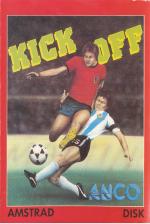 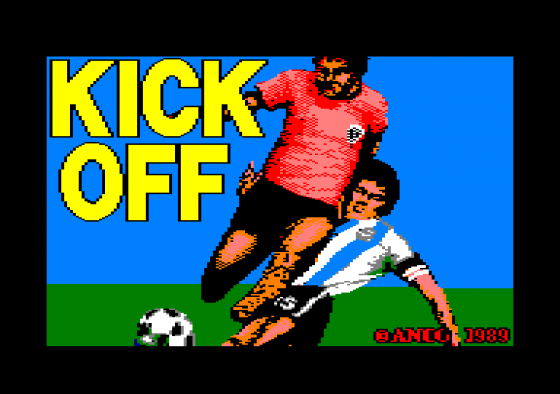 "Not another soccer sim!" we cried when Kick Off landed on the AA doormat. We've reviewed well over thirty in the past four years. Could yet another possibly offer anything new?

Kick Off promises the usual stuff that you'd expect from a football game. One or two players, a practice mode, and a league table that allows up to eight people to play. It has penalties, corners, throw-ins and fouls. You can set team formation, tactics, dribble, pass, tackle and shoot.

On first impressions, Kick Off really does look dire. The graphics are Spectrumesque to the very worst degree. The players have very little detail and are drawn in a single colour for each team - a rather sickly choice of cyan and purple - though this gives excellent contrast on a green screen. The ball is a solid white blob and you get the feeling that the graphics haven't had much work put into them. The green pitch has white markings, apart from which there is no other background detail. 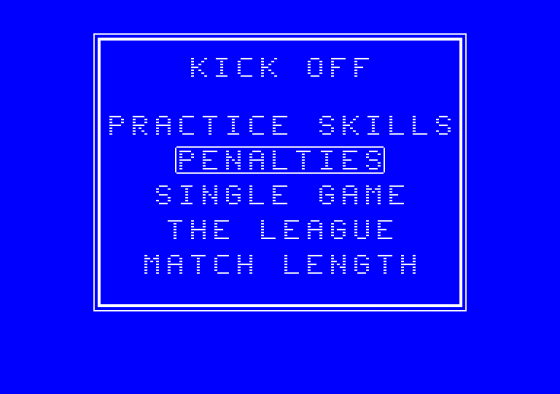 Sound too is limited. All you hear is the referee's whistle at various stages throughout the match, and a bouncing sound whenever a player kicks the ball or it hits the ground. Apart from these two spot effects, the sonics are non-existent. There is no music of any description, and although sound is by no means the most important aspect of a game, the lack of it seriously detracts.

Once you get over the bad presentation, however, the fast scrolling and slick action begin to shine through. The playing area is fairly small - but not so small that you can't see what's gomg on - and it moves along at a fair old whack. The players are all computer-controlled apart from the one that touched the ball last, and this chappie can be easily controlled with the joystick or keyboard. (Control changes each time the computer sends a player into the ball.)

This makes for a good system, as you're not trying to move one player and suddenly finding that you have switched to another. Sometimes, however, when the ball lands right next to one of your team it can be frustrating not being able to take direct control. 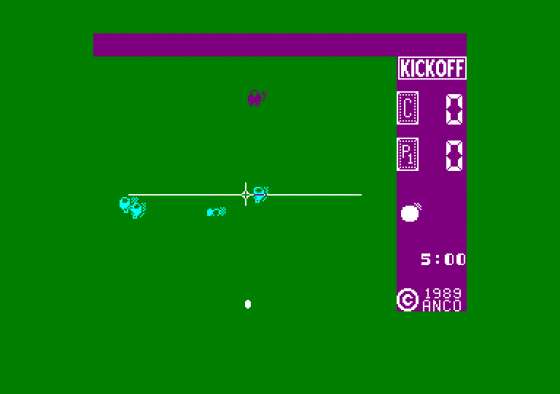 It's great fun playing against the computer, which plays a well-balanced game. It isn't so easy that you thrash the computer every time, but it's not so difficult that it's impossible, either. The skill levels of the teams can be set from Sunday League to International standard, so it's possible to adjust the opposition to match your abilities.

The real fun comes when the opposition is human. The sheer exhilaration of playing real enemies... er, colleagues... had the entire AA office enthralled for hours. It really is the one of the most playable two-player games we've come across, and is certainly the two-player footie sim.

The League is another excellent option. Up to eight players can compete at once, and the on-going competition can be saved to tape or disk.

We had mixed feelings about Kick Off. With the fast gameplay and pin-point playability you're over the moon, whilst the appalling graphics and naff sound leave you as sick as a parrot (That's enough metaphors - Ed] At the end of the day, though, the good points outweigh the bad, and Kick Off is well up in the first division.

Beat the computer on International level.

More suited to green, if anything.

Sonics 17%
Conspicuous by their absence.

Grab Factor 67%
You soon get into the action after the initial disappointment.

Staying Power 86%
Once you've played one game, you're hooked.

This really is the one of the most playable two-player games we've come across, and is certainly the two-player footie sim. 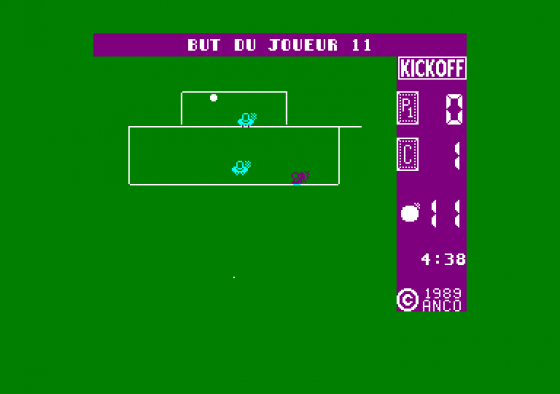