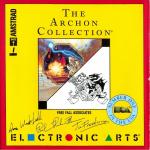 Archon Collection | Spelling It Out | The Evolution Of Archon | Second Opinion | First Day Target Score | Green Screen View | Verdict | In The Light Corner... | And In The Dark Corner...

Question: take chess, throw in a mixed assortment of monsters and magic, add a few arcade-style elements and what do you get? Answer: Archon. It's a battle between the forces of good and evil with no sophisticated plot: beat your oppo-nent. For your money you get not only Archon, but get Archon II: Adept.

The game is played on a nine by nine board of squares which are in several flavours, the most useful being the power points. There are five power points and to win the game you have to either control all five of them or blast your opponent off the board.

You can play either good or evil and there's also an option to play against the computer. Roth sides are made up of eight different types of pieces which make up a total of 18 pieces on each side in all. Good consists of nine knights and two each of phoenix, djinni, valknes, golems, archers and unicorns. The evil forces are made up of nine goblins and two each from among basilisk, manticore, troll, shapeshifter, dragon and banshee. The good and evil forces are both led by a spoil caster: the wizard and sorceress respectively.

As well as having an army of pieces to hack away at your opponent with, you also have seven spells at your disposal: teleport, heal, shift time, exchange, summon elemental, revive and imprison.

With a Teleport, you can rapidly move one piece to any other square on the board.

If one of your pieces is wounded, the damage can be repaired with a Heal spell.

Time can be reversed or accelerated with the Shift Time spell.

With Exchange, any two icons on the board can have positions swapped.

Four types of elemental can be summoned with Summon Elemental: earth, fire, air and water. Elementals fight for you for one combat.

Dead pieces can be brought back to life with the aid of Revive.

Archon II is very similar to Archon in set-up; the main difference being that you have four Adepts to conjure creatures associated with the four elements and the objective - this time - is to capture your opponent's citadel. Combat is resolved in exactly the same way as in Archon and there are also some spells that can be used to aid you or hinder your opponent.

The graphics are bright and colourful but it would have been nice to have more animation. Sound is rather limited, but it is a strategy game after all.

Not quite up to the standards of recent Electronic Arts games, but still worth a look nonetheless. Several difficulty levels help to extend the life and being able to play against a human is always a worthwhile addition to a game.

Not Electronic Arts' strongest ever game but, even so, it has a fascinating quality that makes you keep returning to it. And, with the various levels, it stays just difficult enough to challenge you to continue.

Not bad at all.

Beat the computer on beginner level.

Overall 71% P. Not quite up to Electronic Arts' high standards, but a very good game nonetheless.

The Wizard is the only member of the good forces who is capable of casting spells and so must be protected at all costs.

Unicorns charge around quickly and fire bolts of energy from their horns.

Boulders can be hurled by Golems... who take some killing!

Valkyries fly through the air wielding a magical spear.

The Djinni is a tough air spirit that can create a tornado.

Standing close to a Phoenix can be dangerous: they explode into a ball of flame and, while they do so, they're invulnerable to attack. They may be lousy combatants, but you do have nine knights to vanquish your foes with.

The Sorceress is just as deadly as the Wizard.

Gaze into the eyes of the Basilisk and it could be last thing you see.

Don't stand near the Manticore's tail or you could end up with more perforations than a Tetley teabag.

Trolls may not be very intelligent, but they have a distinct talent for picking up and throwing things. They were always bottom of the class, but no-one ever laughed at them for it, unless they wanted to be picked up and thrown about a bit.

The Shapeshifter is a sneaky one, which becomes an exact duplicate of its foe.

Everyone knows to keep well away the fearsome firebreathing Dragon.

The wail of the Banshee drains the life-force from anyone too close to her. Like the popstrel Tiffany... Only worse.

They may only be armed with clubs, but Goblins can be a match for the Knights.

Archon Collection | Spelling It Out | The Evolution Of Archon | Second Opinion | First Day Target Score | Green Screen View | Verdict | In The Light Corner... | And In The Dark Corner...

Two games for the price of one. Neither are quite up to Electronic Arts' otherwise high standards, but it's very good nonetheless.
Logout