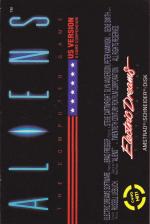 The U.S. version of the Aliens "game of the film" at last hits my desk. Can this be true? Six games in one? I wouldn't call them games, just levels. Don't put too much hope in the instruction booklet helping you through this game, unless you don't mind spending ten minutes looking through the whole thing until you eventually find the bit that explains the level you've just reached!

You control Ripley at first, in her quest to save her fellow marines from the evil grasp of the Aliens. The first level asks you to guide your ship through the turbulence surrounding the planet that has been taken over. This is the best bit of the game, and needless to say the hardest bit. A wormhole appears before you and you must struggle with the controls to force your ship to stay in the middle.

The second level is called The APC Rescue Attempt. This is where you guide each of the four marines back to the surface of the planet. You can choose which of the four marines you control at any one time. Four screens are shown at the bottom of the screen. These show the status of each marine. They show when an alien is near one of them, and when an alien has eaten one of them.

Level three is where you try to fend off a barrage of attacking aliens while your comrades attempt to cut a hole in the door. The aliens hurtle toward you down one of a number of different tracks at varying speeds. You must shoot them or stand in their way.

In level four, you have to find your way through the maze of the air-duct system to get to the drop ship. Level five is where you must save Newt from the Aliens before the Atmosphere Processor explodes. The last level is where you battle against the Queen. You do this by repeatedly hitting her with your power blaster until she becomes so weak that you can grab her and drop her through the air lock. Voila, c'est tout!

The first level was brilliant until I tried to play it. I felt so cheated because this game looked to be so good. Unfortunately, my expectations soon dropped. Level two onwards uses some of the worst graphics since my eight year old cousin got into defining characters! The colours used are awful and the figures are poorly animated - if you can see them at all! The sound is mediocre. This is probably one of the most annoying games this year.

Graphics 51%
P. Good animation on level one.
N. Let down by shoddy, small characters after level one.

Sonics 34%
P. Nothing to shout about.

Grab Factor 60%
P. Level one is too hard to pass
P. In-built cheat lets you play ail the levels.

Staying Power 52%
P. Six games in one.
N. Confronting the Queen is so boring!

Level one's animation is good but it's let down by shoddy, small characters afterwards.