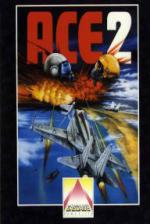 Last year, Cascade's ACE made quite an impact. It hit just the right balance between simulation and arcade game to appeal to a wide audience, it was neatly programmed, and it offered more excitement than conventional flight simulators.

For all that. Aerial Combat Emulator was a simple game of skill and timing.

ACE 2 tries to repeat the formula with a little more gloss, but fails to make a better impression than the original.

The main gimmick is that ACE 2 can be played as a oneor two-player game.

The screen display includes a score column showing planes remaining and points scored on the left, and two out-of-cockpit view windows. Each window includes a control panel giving details of speed, altitude, fuel, compass bearing, ammunition and so forth. There's also a message display, which comes up with comments like 'reduce altitude to land'. This is pretty odd, since the game doesn't require you to land (or take off for that matter). All you do is fly off the map under 1,000 feet, and you're switched to the armament screen, where you can take your choice of heat-seeking, radar-guided, air-to-sea missiles.

There are two main scenarios to play. A straight air-to-air battle with you versus the computer (or another player), or a more complex mission where you have to knock out a spyship before reaching for the sky.

The graphics, unlike those of the undistinguished Top Gun which ACE 2 otherwise resembles, are solid rather than wire-frame. However, since the background consists entirely of blue sky. blue sea, a black horizon and a small black aircraft, even the smooth and speedy scrolling doesn't convey much excitement.

The artificial intelligence controlling the computer aircraft doesn't seem to be that hot. You can happily fly for ages without getting shot at. At the same time, if you get the baddy in your sights, it lurches around the screen in a way which definitely contravenes accepted laws of physics.

If anything, ACE 2 falls down for the same reasons that ACE 1 was a success. Since you don't have to worry about little things like take-off and landing, undercarriage, flaps, rudder, engine temperature, maximum speed and G-force, ACE 2 definitely isn't a simulation.

However, it doesn't quite make the grade as an arcade game either, because the action isn't fast and variable enough to maintain the interest.

Perhaps Cascade thinks that adding a few extra details like variable weapon load, alternative missions, and defensive measures like chaff and flares makes ACE 2 more appealing. It doesn't really, because the basic idea is played out and the gloss doesn't add enough to make the difference.

Good basic idea, but ACE 2 doesn't quite make it either as an arcade game or a simulation. Adds nothing to ACE 1.

Good basic idea, but doesn't quite make it either as an arcade game or a simulation. Adds nothing to Ace 1.