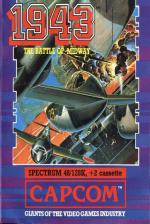 Anybody who's been a computer gamer for any reasonable length of time will remember that 1942, Capcom's original (and ageing) coin-op was licensed and converted by Elite quite a while back. 1943 was released by Capcom fairly recently and was snapped up by US Gold as part of their mass-licensing deal with Capcom.

1943 is basically very much in the same mould of its predecessor so much so that it's almost exactly the same game, albeit with several improvements and gameplay tweaks. The game is set in World War II and recreates the famous Battle of Midway. Taking control of a fighter bomber, the player's mission is to fly deep into enemy territory and wreak havoc.

Scenario aside, 1943 is a vertically scrolling shoot-'em-up with some novel twists, the most notable of these being the simultaneous two-player option that allows you to team up with a mate and cause twice as much damage.

Planes fly down the screen and are easily disposed of by letting rip with a quick volley of machine gun fire. Slightly more difficult to hit are the formation planes that spiral around the screen. Shooting an entire wave of these leaves behind a POW symbol which can be collected to upgrade the plane's weapons. Fortunately, unlike its predecessor, 1943 works on a system whereby crashing into an enemy plane or getting hit by a bullet won't kill you. Instead, you're given just one life that is represented as an energy bar which is depleted every time you take a hit; when the energy hits zero, the game is over.

At the end of each level you must attack a fleet of heavily-armed warships by blowing away the symbols on the decks of each. Managing to do this completes the level, boosts your score and energy and sends you onto the next level. Later levels see the unwelcome arrival of huge megabomber planes that take up almost the entire screen, spewing out bullets with gay abandon and requires continuous machine gun fire to shoot it down in flames (a very satisfying experience).

1943 is a very good game indeed, but doesn't offer enough improvements over the original. Graphically everything is fine, although things can get a bit confusing at times. Sound is adequate and there's certainly enough gameplay to keep you going, although it is a mite easy due to the new 'energy bar' system. The two-player option is well executed, but even so the game overall is a bit dated. One for the younger gamers perhaps?

1943 is a very good game indeed, but doesn't offer enough improvements over the original.