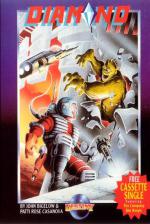 Activision's first release on its new sub-level, Destiny, sees you in command of a strange robot-like being by the name of Supertronic, whose job it is to secure a huge prison spaceship which has recently malfunctioned, thus letting all the prisoners escape. The Supertronic is a weird-shaped device, resembling a flying metallic Melon. The Supertronic glides around the scrolling prison ship landscape with the intent of stealing all the exit hatches to stop as many prisoners as possible from escaping.

In order to do this, the Supertronic is equipped with a nifty little device which allows it to transmutate into any of four different control modes:

Hillbar Mode: In this mode, the Supertronic retracts all its outboard systems in order to protect itself from attack and collision. The problem with Hibar Mode is that as this mode uses up zero power, you have no control over the Supertronic at all, so you are forced to drift around helplessly until you choose another mode.

Solar Mode: By hitting the S key you are transformed into Solar Mode, allowing you to replenish your ship's energy supplies by sucking in the energy from the solar panels that are scattered around the ship. As Solar energy replenishment is a time-consuming process, it's possible to get another one of your five Supertronics into action while the other one re-energises.

Killar Mode: As the name would suggest, this one is the most fun! Killar Mode activates the Supertronic's onboard weapons system, thereby allowing you to eliminate anything that stands between you and mission completion.

Rovar Mode: No, you don't turn into a dog, although you do work like one. In this mode you glide about the ship looking for unsealed exits, from where the prisoners escape. To seal it, you simply stop over it. Although you do have access to use your weapons systems in this mode, unlike Killar Mode, you cannot use your inertia-field modules, which is just a fancy word for limited invincibility. By sealing all the exits on a prison ship, the ship is pronounced secure once more and you pass onto the next level.

Other Supertronic modes available allow you to transfer power from one Supertronic to another, and use two Supertronics together to help each other out of tight corners and traps.

Diamond sounds from this review like a pretty deep and absorbing game, but it isn't. It doesn't really break any barriers as far as Speccy games are concerned, and the gameplay is too diluted to offer any long term challenge, which is a shame as the game's graphics and sound aren't half bad, with some nifty scrolling routines and excellent use of colour. There's also a free cassette single featuring up-and-coming band The Company She Keeps but I can't comment on this as I haven't been able to listen to it (Julian won't let me borrow his Walkman).

So there we have it. Not too bad as Spectrum games go, quite involving the first couple of goes, but not enough action to hold you for long, especially not for the price.

Not too bad as Spectrum games go, quite involving the first couple of goes, but not enough action to hold you for long.