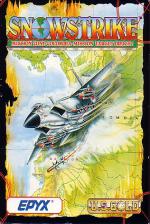 These Columbian drug barons are boys, eh? And if there's anybody who deserves a good firm slap on the wrist in this day and age, it's these moustache-twiddling masters of the evil white powder that's corrupting the modern world. Anyone who's seen Miami Vice or Grange Hill will know precisely how serious the problem is. So, how do we put a stop to this terrible trade? Tougher customs control? Nah. More effective anti-drugs education? Nah. How about taking off in an F-14 Multi-Role Jet Fighter and giving Manuel Sanchez Domingo and all his powder-peddling pals a proper kicking? Yeah!

In Snowstrike you're the fortunate pilot of a state-of-the-art F14, and get to go out and drop bombs on these Hispanic Hitlers - and that's basically the rather lame excuse for yet another slice of combat flight simulation action a la Strike Force Harrier, Fighter Bomber and, er... several other flight simulations.

Ten missions await you, all with a suitable drug-busting flavour. Bombing cocaine refineries, demolishing drug warehouses, terminating drug transports end sinking enemy aircraft carriers (because we all know that these drug lords use aircraft carriers all the time) all go towards halting the granular menace and earning you some juicy medals and commendations along the way. All you have to do is find the target, get a positive ID on it, and then blow some very big holes in it until it is no more. Then it's back to the airstrip or aircraft carrier from whence you came for a mutton tikka, a cold beer and start preparing for your next trip.

Along the way you'll come up against some marauding MiGs that need to be blown away, else they become a pain in the nether regions and may even shoot you out of the sky! But by clever use of the Control Room back at base (where you slide a bloke's finger about any push buttons to get information), you can pick the most convenient route to your target and thus avoid any unnecessary aggravation.

Anyway, that's about the long and the short of it. Despite its potential, Snowstrike falls short on action. There's not a great deal to do, and even less to see due to the blandness of the graphics. I spent hours flying about looking for drug fields, and all I found were these blank dark rectangles in the ground. It wasn't until I resorted to reading the manual that I found that those rectangles WERE the drug fields! Hardly instinctive gameplay is it? If it wasn't for the annoyingly repetitive graphics, Snowstrike might have been a bit more involving - as it is, it's so average not even the good ol' Nunkie Sam Versus The Bad Guys can save it Zzzzzzzzzz....