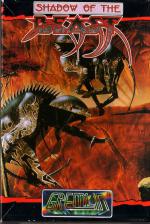 Shadow Of The Beast | Overall Summary

Will wonders never cease? When it was released last year on the almighty Amiga by the almighty Psygnosis, Beast was hailed as the best thing ever . With a thousand million billion trillion screens to explore; fifty thousand layers of parallax scrolling, sixty channel music, twenty googolplex colours (*) a designer T-shirt which came free in the oversize box, Beast got a lot of publicity and subsequently did very well for itself. What most people didn't realise until much later, after all the hype had died away, was that underneath all the flashy decoration, the game was only an average arcade adventure. (*) These figures may be exaggerated, but not much.

Now it's appeared on the Spectrum - something which not many people ever expected to happen - courtesy of Gremlin, and despite the obvious corner-cutting that's had to be done, it's not bad at all. You're this rather ugly-looking warrior chap who's out to get an evil Beast who's been causing all sorts of trouble in the world of Necropolis. Putting an end to all this badness is achieved in typical arcade adventure tradition - run left and right, climb up and down ladders, beat up baddies and collect objects. Sounds a bit seen-it-all-before? Well the truth is you probably have, but it's the execution that sets it apart from the crowd.

In the course of running about, collecting keys and helpful objects, you'll be accosted (oh no missus) by all manner of weird and wonderful creatures - ranging from over-sized ants to bouncing Psygnosis logos. A hefty monster-punch sees these off, but watch out too for nasty spikes that come up from out of the ground and puncture your bottom.

So what nice about Beast then? Well the graphics for a start. Despite being about as one colour as graphics get (whatever happened to the multi-colour, no-clash sexiness of Lightforce, eh?) they're very pretty indeed, and there's a nice clean-cut feel to them. Sound too is lovely jubbly with an epic theme (i.e. you can't turn it off) playing throughout. Bestest of all though is the gameplay, with loadsascreens to mess about in, lots of puzzles to solve and a never-ending army of sleaze-minions to give a damn good seeing to. And for the intellectuals amongst you the layout of the game makes it the perfect candidate for some serious mapping - should you be that way inclined.

Graphically great arcade adventure jobby with plenty to do and see. A jolly good bash.

Shadow Of The Beast | Overall Summary

Graphically great arcade adventure jobby with plenty to do and see. A jolly good bash.