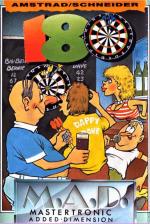 180 is an upmarket darts game with a difference. Make sure your volume level is turned up before the game has finished loading, because you really don't want to miss the digitised "180!" yell so familiar to TV darts.

180 lets you use joystick or the keys you want. You can play 'round the clock' to practice. I suggest you start with this to get used to controlling the dart. A hand is shown on the screen, which you move diagonally to target the dart. Press Fire to throw.

The rules are the same as real darts: you must finish on a double, and hitting the treble-20 bed three times gives a score of 180 and the "180!" yell.

On your turn, the screen shows the hand holding the dart, the board itself and the automatic blackboard. However, when your opponent throws, you see a side shot of him throwing. (Something is supposed to happen in the background while he is throwing, but I ain't seen nuffink happen there yet, you know what I mean, Harry?)

Playing 501 takes the form of a real contest starting from the quarter-finals. In the quarter- and semi-finals, you play one of eight opponents from Mega Mick, Belly Bill, Delboy Des, Devious Dave, Sureshot Sidney, Limp-wrist Larry and Tactical Tel. Each match is the best of three, so you must beat your opponent twice to go through to the next round.

The skill of the opponent you face depends on the stage of the competition in which you face him. The only difference between the eight different opponents is the way in which they finish. One likes finishing on the bull and will often attempt to go bust, by scoring more than he needs, to allow him a second attempt at the bull.

If you reach the final, you face Jammy Jim. As the cassette inlay says, "to beat him you must be more than just amazing".

The inlay card includes a useful table of possible finishes from 170 down to 1.

I enjoyed playing this game and felt that most of the features were done well. However, the only sound in the game is the applause when you score 100 or over, and the "180!" yell. But overall, an excellent buy for the price. I got hours of fun and enjoyment from it.

As dart games go, this is one of the better efforts with good graphics, tough opponents and a nice practice screen. I would have preferred a wider variety of games instead of just 501 but there's still plenty of fun to be had.

Clear, and has board colour options.

Get to the final.

N. The real thing's still more fun.
N. Nobody buys you a round.
N. Plays only 501 and round-the-clock.

I would have preferred a wider variety of games instead of just 501 but there's still plenty of fun to be had.