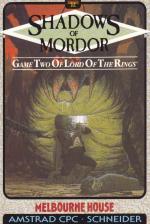 At long last the second part of the Lord Of The Rings from Melbourne House is seeing the light of day. Part one sold like crazy, but had many serious faults, its very slow speed of response and the bugs that caused the program to crash being the most memorable. The Shadows Of Mordor should sell well to all LOR fans, regardless of the faults of its predecessor. But what can we expect this time round? Have those Australian programmers learnt from their previous efforts?

Melbourne House, with an ever watchful eye on the promotion of its products, sent out pre-release versions for the magazines to review. These were essentially the finished article, though the final version will have some slight textual alterations to keep it more in line with Professor Tolkien's original style - perhaps this refers to the Wimpy Orc I met.

The Shadows Of Mordor continues the story of Frodo's and Sam's travels from shortly after where part one ended. Should you succeed in your quest (be positive - could there be any doubt) you will finish this part after escaping from the lair of the giant spider, Shelob. Unlike part one, this is a single load game and does not have such a large number of locations. The emphasis is more on problem solving and learning how to use the objects you have with you or find along the way.

The plot follows the second book of the trilogy - The Two Towers - fairly closely. There are only minor variations to give the game a series of problems for the player to solve. There are no graphics in the CPC version, which sadly is on cassette only. The location descriptions are long and picturesque, without the ghastly liberties taken in part one - remember the heavy metal ore band? There is even a PRINT facility, so that players with printers can study their moves at leisure from a hard copy.

As there are only two hobbits involved this time, there are no overlapping pages displayed on the screen to let you know who is your present character, and consequently no 30 second waiting period while they all sort themselves out.

Once loaded, the program asks which hobbit you want to play, Frodo or Sam. You may choose to play one or both - for both type in FRODO AND SAM, not BOTH. Although there are only about seven major puzzles to solve, and not that many objects to find, the game is unlikely to be finished at one sitting.

Everything has a very logical answer and once you have spotted what is needed you only have to overcome wandering ores and the comprehensive command interpreter.

The odd roving orcs are a real pain. Hobbits are not exactly the most warlike of creatures and cannot be expected to defend themselves too well when attacked. Consequently, confrontation is to be avoided. This is not a quest for a single hobbit. Six times, on arriving at one location, Sam died before my eyes. We had given no aggravation, merely walked past. Now this should not have annoyed me too much as I had sensibly saved the game position only a few steps back. Unfortunately saving a game to cassette takes four minutes, and loading it back in six times is the best part of half an hour.

The orcs serve no real purpose in the gameplay, except of course to give a very real sense of atmosphere. Their appearance is random, so I was just repeating my actions until the one-in-whatever chance of them not appearing. Surely there could be better solutions, like wearing the elven cloaks, or hiding, or...

The long save time is presumably taken up with recording all the possible variations of the independent actions of characters within the game just as in Part One and The Hobbit. Surely one might question whether this complication is adding to or subtracting from the pleasure of the game. I really would like to know the number and type of possible independent actions that are occurring in the background. And, more importantly, whether these actions could not be achieved in another manner.

Because of this complex programming, you cannot QUIT and immediately restart the game: You must reload the main program first (about 12 minutes).

There is also a discernible time lag between the location description being displayed on the screen and the appearance of the input command cursor. If you are a quick reader or are simply travelling over known ground you will often find you have typed in a word before there is a cursor. As there is no keyboard buffer operating, that word is lost and you will either have to repeat the command more carefully or delete what you have written and start again.

Commands may be strung together (up to 128 characters) and talking to other characters is easy and necessary. For all that the interpreter is quite comprehensive, it is still somewhat muddle headed on occasions. I mistyped WAIT as WIT and got the answer: "Sam attacks Sam with the beautiful small sword. Sam hits Sam". OUT gives: "Frodo doesn't see anything to lever over the cliff".

The game only crashed once, when I tried to climb into a pit west of a lonely pine tree. Hopefully this is only possible in the review copy. Still, you have been warned!

The game design is not all that I would wish: It is slow and sometimes tries to be too clever, reading more into my words than was intended. Even so, it plays better than part one, is true to the atmosphere of the book and will be enjoyed by all patient lovers of Middle Earth, Just remember to eat often hobbits have a more active metabolism than you do, listen to what Smeagol has to say - and be wary of orcs and pits.

It plays better than part one, is true to the atmosphere of the book and will be enjoyed by all patient lovers of Middle Earth.