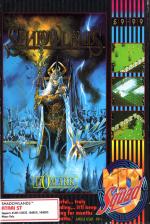 RPGs aren't everyone's cup of proverbial tea. The manuals usually start with an introductory story written by someone whose literary imagination is stunted by a Dark Overlord who controls all that he surveys. Invariably, a band of select heroes are the last hope for mankind and they inevitably face overwhelming odds in their assigned quest.

Unsurprisingly, you find yourself under the bondage of this genre's cliche. Not that that's really a problem, mind you. No, not at all. In fact, Shadowlands, despite the rather tedious plot, is a pleasant little game in its own right. The ability to customise characters to your own parameters is the best step thinkable in the goal toward personal involvement; you can alter name, eye, ear, nose and mouth. And also the characters' attributes of strength, combat ability, magik level and health.

Compromise has to be reached for optimum values but hey, isn't that what good dungeoneering is all about?

If you're more impatient you can start with the ready-selected character. This is useful, if only to get acquainted with the finely tuned intuitive control system. Dungeon Master fans may recognise the inventory screen straight away; there's very little difference in operation between the games. So what does Shadowlands possess to make you consider parting with a tenner? The answer is high involvement playability.

Combat can involve any manner of strategy whether it be in the formation you choose for your character to adopt or the manner in which they use their weapons. Magik spells are mostly helpful, both offensive and defensive, and as you expect, are vitally important to successful completion of the game. Use them intelligently and with care.

Other neat touches are the ability to see what may be on the other side of a dungeon wall, which aids planning, and tactics. Torches, which are crucial if you wish to see properly, illuminate less of an area as they burn down; effectively a visual reminder of their condition. Smart one!

Shadowlands, despite the genre being done to death, offers plenty of scope and gameplay to convince you, even if you're not an RPG fan, to part with your cash.

A refreshing slant on the RPG genre.