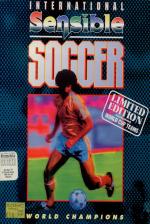 And remember if the score stays the same and no more goals are scored then the result will stand as it is...

Although it only seems like yesterday, it's almost two years since we first reviewed Sensible Soccer. Andy Lowe delivered the match commentary then and the lad was so impressed that he awarded it a net bulging 91 per cent: "The most fun you can have indoors without taking your team scarf off" he cheered scampishly.

This leads to a quandary however, as Sensible Soccer was so good, that the lads at Sensible have found it almost impossible to tweak the gameplay to any great degree for this new version. That's not to say that there aren't any changes, there are, but most of them are cosmetic in nature, merely adding icing to an already sumptuous cake.

So where does that leave International Sensible Soccer World Champions? Obviously, it's been timed to coincide with the World Cup to coax those few unfortunate individuals who haven't yet experienced the divine revelation that is Sensible Soccer into buying the game. But it begs the question: "If I've already got the original, is this new version worth buying?" The answer, unfortunately, has got to be "no, not really". But it's a "no" with some major reservations.

There's an option to upgrade your old disks to the new version for a mere eight quid, which is more enticing than the standalone version which costs £19.99.

Before you decide though, let's investigate further just what these changes are:

There are two more changes to the Specials. Beginners can now get to grips with the game through a Turkey Tournament and a Booby League. The Turkey Tournament is a 16-team competition comprising a two-leg first round knockout from which the winners go into two groups of four teams who all play each other once.

The Booby League is a straight league of eight teams who play each other once. Both of these specials offer the easiest teams to beat a sort of beginners introduction or option for folk who really like to gloat.

The final change to the Specials Options lies in the structuring of the European Cup Tournament. Teams now line up into two groups of four teams after the completion of the second round matches. The winner of both groups then play each other in a legged final.

That's just about it. The only other difference is the inclusion of an animated referee for handing out cards. He appears in much the same fashion as the shopkeeper from the Mr. Benn.

So, now in possession of all the facts we'll ask that all-important question again: "Is International Sensible Soccer worth purchasing?" If you don't already have Sensi, what are you doing reading this review, go out and buy the International Edition now. If you already own the original, it's a more marginal decision; can you live without the changes and is eight pounds too much to pay for them? You're on your own with that one. We've got a copy, so we're happy.

If you don't already have Sensible Soccer, go out and buy this International Edition now.