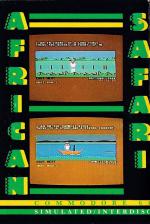 African Safari, according to the cassette inlay, "abolishes the distinction between arcade and adventure". I was under the impression that this had been done and not by software such as this, which is essentially an adventure with graphics, along the lines of (but nowhere near as good as) Melbourne House's Zim Sala Bim.

Here you're Dr. Livingstone, seeking the long lost Kenyan Diamond, the character being in the centre of a scrolling graphics display. By a curious choice of commands you need a joystick to move him east and west, but have to type GO NORTH or GO SOUTH for those directions!

Above the display is a description of your surroundings, and LOOK will have the Doctor gazing around and reporting on what he can see. Beneath is stated the directions in which you can move, the "What Now?" prompt, and a clock (You have only an hour to complete the adventure, with no SAVE or PAUSE facility.)

Initially you can only head east and west, and east finds a peanut plant with peanuts attached. GET PEANUTS? "I've got a bad back," reports the Doctor (Some Doctor!), a reply that becomes infuriatingly common, as at the next location where there's a fire and a tin can.

Further along are two monkeys, one strong and one weak; the weak one having the advantage of a gun. You must choose which of the monkeys to take.

The eastern limit of the first screen is set by a snake sitting on a paddle, and when you've walked to the western limit you can GO SOUTH to the Xambesi River, and another set of east-west locations for your character to walk maddeningly slowly along. Here you find a boat, so now you're up to the Zambesi without a paddle. How to deal with the snake? Keep exploring, and use your monkey.

More difficult is how to deal with the strange responses! Type LOOK near the boat and you're told: "There is nothing special. I can see a boat here." GET BOAT. "I can't see a boat."

African Safari is ruined further by being so slow to play. If this abolishes the distinction between arcade and adventure, then give me one or the other every time.

If this abolishes the distinction between arcade and adventure, then give me one or the other every time.