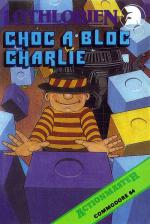 It's one thing to rip off an arcade game, giving the world yet another penguin pushing ice-blocks around, but it's quite another matter to take the basic idea and turn it into something new - in this case, something infuriatingly difficult. Charlie's the character you're controlling with keyboard or joystick and he's trying to escape from a warehouse - all 16 screens of it. The place is sealed by a double row of blocks all round the walls, and a further 34 blocks in the middle. There's also a hairy creature haring round the place laying Robot Mines, and Charlie's first job is to push the blocks (one at a time, of course) to seal off the hairy monster.

Then comes the tricky bit. Four of the blocks are purple, and four are gold. The gold ones are merely bonus blocks, offer extra points if you succeed in taking them through to the next screen: but you can only get through to that screen by placing all four purple blocks together. Easy-peasy? Well, behind each purple block is a hostile guard.

This is the kind of game where just releasing one purple block seems like a major achievement, and then you realise you have to do it three more times. Then you lose the last of your five lives and have to start over again. Or you release the hairy monster into your half of the screen.

The only complaint is the difficulty of control, both by keyboard and joystick, as this is one of those games where you have to centre up the character exactly and you spend ages jiggling him backwards and forwards into just the right place. This game exhausted the efforts of myself and some of the PCN in simply getting out of the first screen!

A game where you have to centre up the character exactly and spend ages jiggling him backwards and forwards into just the right place.