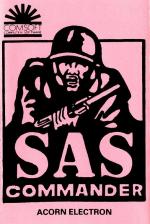 Yet another game with prizes to be won. High scorers in SAS Commander stand to win £50 in cash and £20 worth of software. Your task is to save the nation from terrorists, who appear in green shirts and red trousers. There are several pages of background story to wade through if you wish, where 'the' is spelled 'thee' for sound odd reason. Controls are simple: Z for left and X for right, RETURN to fire. Sound can be toggled on or off, though not during the game. There are three street scenes and ten terrorists to be disposed of before you move on.

The first screen shows a row of buildings as the background, with you as an armed officer in blue tunic and red boots. The graphics are colourful, but very chunky, and the sound is very limited. At this level a single terrorist appears from time to time, in a doorway or window and, after a brief pause, starts firing at you. If you don't move from the centre where you're placed initially, he just carries on firing at you forever - which begins to make you wonder...

To nail the baddie involves dodging his monotonous fire - not difficult as he's not very accurate in the first place, and is very slow to re-aim - then letting him have it between the eyes. The only dodgy part is that the terrorists take hostages, who appear with their hands up, dressed in blue tops, not too difficult to recognise. Shoot a hostage and that's the end of the game. The terrorists shoot from behind the hostages, so it's just a matter of dodging bullets and waiting for the hostage to turn into a terrorist.

Dull by anyone's standards. Prize or no prize, I couldn't bear to try beyond level two, where you get two terrorists at a time taking pot-shots at you and the fire is more rapid.