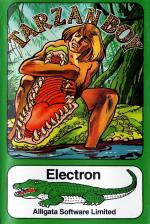 Tarzan Boy is Alligata's latest for the BBC and Acorn Electron - and it's certainly been worth the wait. There are four levels, and the first's hard enough, even for experienced gamesters.

Cast as Lord of the Jungle, your role in life is to save Jane from an awesome fate. To do this you have to pass through or past any number of hazards.

The demo mode which takes over if you're too slow deciding whether or not you can face the game is useful because it gives you some idea of what you're up against and allows you to estimate pathways and tactics.

In the first screen Tarzan's shown as a rather simple white figure wearing a mauve loin cloth. He stands by the trunk of a tree at the bottom left of the screen, faced by a yellow snake which lowers and raises itself from the lower branches. Once past the snake, there's a column of blue which behaves rather like the snake and whereas the snake is deadly, leaping on to the top of the column is the only way through this section. Life's not a bed of roses, for staying on the column all the way to its apex results in a fatal headache for our hero. Leaping to one side lands him on yet another blue column, moving faster than the last, which can be used as a platform for access to other parts of the screen. Stay on this too long and he'll fall off. Higher up the screen, and you'll need some practice even to make that, you'll encounter unfriendly monkeys dropping coconuts on your bonce, not to mention grisly detached snapping heads, deadly bats and the like. Right at the top is the arrow you must pass to the next screen.

Later levels feature monkeys, cheetahs, flying snakes and much more. For the BBC and Electron, this is a very good game indeed, even if the graphics are a bit chunky.

A very good game indeed, even if the graphics are a bit chunky.