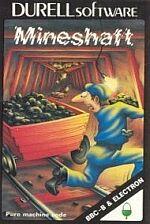 If you've ever envied Spectrum owners because of the relatively, better games graphics, but this. I thought I had swapped Beeb for Sinclair.

Mineshaft is a fairly straightforward platform game, with a topical theme. You have to collect as much coal as you can from the 20 locations in the mineshaft. Not with pick and shovel, but mostly by your wits. Passing over the nuggets wins points, as does bouncing over the sludge.

Your miner is a big-nosed, cloth-capped figure, and he's shown as clearly as many a Spectrum character. His movement has been given just as much thought; when he springs into the air the ballistic parabola looks real, making it quite easy to learn fine control.

The 20 locations have wacky names like Impossible Jump?, The Water Works, The Junk Room and La Fin (that's the last). One of the best features is that pressing ESCAPE takes you to the next screen.

To be honest, none are very complex nor very different from each other. There's an entry and an exit to each screen, with up to half-a-dozen or so lumps of coal sitting in what look like impossible locations. You always start in the same position, different for each room, and have to use the platforms to leap to the coal. The red platforms are made of sludge which disintegrates as you cross it so it's better to bounce.

Naturally, falling too far is fatal. And to add to your difficulties, you only have a limited supply of air.

Mineshaft's not a brilliant game by some Spectrum games standards, but compared with most Beeb games to date, it's one for collector's corner.

Compared with most Beeb games to date, Mineshaft is one for collector's corner.