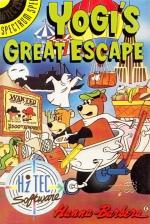 I'm smarter than the average bear! Well you'd have to be to survive in this new cartoon adventure from Hi-Tec. You take the role of good of Yogi Bear who's trying to escape from Jellystone Park. The park is to be closed down and all the animals moved to the zoo, so Yogi decides to run away - no more picnic basket nabbing for Yogi!

Different platforms, moving floors and other obstacles must be negotiated by our lovable bear. You have to keep Yogi on his toes too. If you slow down, the Ranger will catch up with him, and off he goes to the zoo.

There are six levels in all, starting with Jellystone Park going through to the Fun Fair and New York City, each with its own detailed backdrops and sprites - new nasties are out to get you on each one too. The trouble with the game being in monochrome is that some times you can't see where things like snakes are hiding.

As well as escaping from the park you have to collect six parts of Yogi's car, six bags of money and six cowboy hats to get an extra super-dooper bonus.

Yogi's Great Escape is a fun, addictive game. Take control of one of your favourite cartoon characters and have a great time. I can't wait to see the other games in the Hi-Tec/Hanna Barbera series, like Hong Kong Phooey!

A fun, addictive game. Take control of one of your favourite cartoon characters and have a great time.