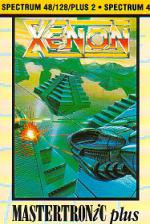 An SU Classic on its first appearance, Xenon continues to hold its head, its tentacles and indeed its entire slimy body high in the air despite many efforts to outdo it by competitors. When Xenon appeared on 16-bit machines (and for that matter as a coin-op), It was widely assumed it wouldn't be possible to transfer its graphic polish and busy gameplay to 8-bit machines.

Well, it was almost true - the Commodore 64 version was plop! But, to give you even more of a reason to jubilate, the Spectrum version was fab, and is still well worth seeking out. It's like this; vertical scroller, pick-up-weapons, multi-form ship, hit M to change from an eight-directional land-crawling tank to a high-flying aircraft. On the 16-bit versions you did this by wiggling the joystick, and it's a pity you can't do this on the Spectrum, because having to hit key M while you're fighting off deathtanks is a wee bit distracting. You wiggle your way between rotating gun placements, fly over metallic wails and fight off flights of alien ships, but at the middle and end of each level there's a stinking challenge in the form of a giant land-crawler which has to be hit in the mouth hundreds of times before you see it off. These nasties are so difficult that you may never get through Xenon without cheating, so depending on your persistence this could be a good investment or frustrating stinker. Extra weapons like armour, homing missiles, lasers, side lasers, wing weapons and rotating balls (pardon?), as well as extra fuel, can be picked up by collecting power puts from clobbered craft. With sixteen zones to complete, divided into four levels. Xenon should keep you occupied until at least Christmas 2016, so slither out and buy it at once.

Blinking Flip! We said it then, and we'll say it again; this is a classic. Buy it or die!

This is a classic.