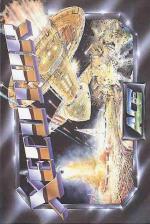 When it comes right down to it, there'll always be a market for a good nippy shoot 'em up. If you can make one with a two player option, so that two players can play at the same time, then you're going to laugh all the way to the bank. In that case, Ace, a new arcade label from The Edge, is going to be spending a lot of time chortling up the high street. Xecutor, its first game, is a one or two player scrolling shoot 'em up, with a brainsquishing variety of weapons and death-dealing baddies to choose from.

The major drawback of shoot 'em ups these days is they tend to be a bit on the easy-peasy side. Oh sure, there's plenty of thrills, spills and about eight billion baddies to shoot, but as you've usually got unlimited firepower, and all the time in the world, you just spray the baddies with bullets and hope for the best. That's the trend, so where does Xecutor's trousers hang? Well, it's nice to see that somebody's writing hard games (and don't say oo-er). Xecutor is just that.

You, and a buddy in a twin ship, if you play two player, are flying up through a vertically scrolling landscape. Coming down towards you are a handful of heavily armed space bozos in their custom-built ships. Okay? Now what makes this different is that there's only a few aliens shooting at you, and you've only got a smallish cannon to hit 'em with, so you've got to be economical with your shots, and accurate if you want to kill any of them. So that's quite hard to start with, but as you progress through the game, you can pick up new weapons and shields, which make it slightly easier to hit things. So you have to use all your arcade skills if you want to stay in the game.

Having sweated your way through each wave of fiendishly weaving death-dribblers, you're faced with a massive ship about six times as big as your own! Having blasted that to golden shred, you would expect to be let through into the next level, right? Wrong! The ship compacts and starts blasting at you and you've got to fight it before you can get through. Phew!

I must say that this is the hardest shoot 'em up I've seen for a while, and as such is great value for money. If you like torturing yourself with tough games, then shell out (peeoww! zip! ka-boom!) for Xecutor.

If you like torturing yourself with tough games, then shell out for Xecutor.