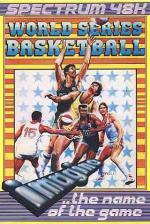 Dougie: Watch out, the Globe Trotters are about. Keep your feet on the beat and the ball on the bounce!

We can all name sports that haven't translated at all well into computer games, but Basketball's one of the exceptions. As soon as the players come bounding out onto the court you can tell that this game's better than your average offering. All the men are well animated and move smoothly around the screen at a speed that must have the sprite routine working overtime.

You can play Basketball against one of your buddies or against the computer. Bach game lasts six minutes and is divided into two halves of three minutes each (Cor and how else might they be divided? Ed). If the outcome's a draw, you're given another thirty seconds to battle for those baskets.

You'll find controlling the players is a touch tricky at first so it's just as well there's a practice mode for improving your dribbling skills and passing techniques. Once you've got the hang of that, you're in with a good chance of taking the computer to the cleaners. But you'll have to maintain very accurate passing and shooting before you win.

Basketball is not only fun but it's also one of those games you keep coming back to. Net yourself a copy! 8/10

Rick: Done 'emself proud, has Imagine! This is a worthy follow-up to World Series Baseball. 9/10