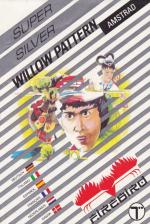 What a genteel name for a game based on a plate and featuring lots of sword-throwing Samurai. The plate in question is a famous design of a touching tale of oriental romance which you are going to re-enact. The Samurai are Firebird's own contribution to make the handsome young lovers' task in eloping with his beloved princess that much harder.

The story on the plate is that the two lovers have been forbidden to meet by the princess's father, the King. They arrange a secret meeting plaoe under a tree and try to escape across a bridge to a waiting boat. The girl's father chases after them but the gods, in a happy mood, turn them into birds and they fly away.

The main part of the game centres on the boy's attempts to reach the princess through a maze guarded by Samurai warriors. Having found her, he has to get to the boat with her while her incensed father pursues you in search of vengeance. The warriors are positioned strategically across sections of the maze, making passage impossible. So you have to kill them using swords that you can hurl at them. The problem is they can also throw swords and you've only got five lives.

The warriors stand still, swinging their swords, and sometimes if you get too close they will throw a sword at you. If you can outrun the sword it will fall to the floor and enable the boy to pick it up and throw it himself. Running into the warriors also kills the boy so careful progress is needed. Swords are also found lying around on their own but they all need to be used carefully.

The number of warriors and swords are such that you have to cautiously move through the maze only using a sword when necessary and not wasting any of them. Otherwise the boy could be left without a weapon and unable to progress any further through the game.

The other main source of danger is the bridges that sometimes cross the maze paths. When you run onto one of these the view switches from the overview of the maze to a side view of a bridge. Three samurai are crouched on the bridge reaching down to try to grab you as you leap across stepping stones in a river. A bad jump or getting caught will plunge the boy into the river, losing a life.

The princess is located in the inner reaches of the maze and to get to her will take all your skills. On the way gems, fruit and other objects can be picked up and one crucial object that will open up the section of the maze containing the princess. Once the boy has reached her he has to get to a boat on the outside of the maze while the father is chasing him. Get caught and it's all over.

P. Cute, colourful graphics.
P. Excellent oriental music throughout the game.
P. A tough task calling for economy in the use of swords.
P. Nice price for a good little game.
P. Good tie-in with the famous old story.

N. Not too much puzzling - just a lot of running around.
N. One wasted sword could ruin a long game.

Some of the prettiest graphics I've seen in a long time, accompanied by some the sweetest music I've heard in a long time, more than compensated for the less than demanding gameplay. It's very nice running around mazes, but there wasn't that much to do in there.

A tough task calling for economy in the use of swords... There's also excellent oriental music throughout the game.