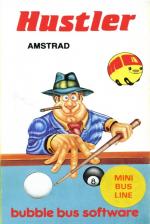 The Hustler is a game which has been around a long time on other computers; its rather late appearance on the Amstrad giving it a budget-ish price. As a game, it will hold few surprises for anyone unless they've managed to miss the interminable hours of snooker on the telly recently.

Of course this isn't snooker, but pool. As such there are fewer balls on the table which can only be an advantage if your aim isn't quite as true as Minnesota Fats.

There are in fact, only six bails to pot. But there is a choice of three different ways of doing this - for one player against the computer or for two players. You can just go for putting all the balls down any order, any pocket. Or you can pocket the balls in order, from 1 to 6. Most difficult is to pocket each ball in its own particular pocket; this could keep you whacking around the baize for a good few hours.

Control is achieved by positioning the cursor where you want the cue ball to strike. Strength is controlled by pressing the fire button or space bar when a rising and falling gauge is at its peak. More delicate features allow you to impart spin to the bail. So, if you are in a straight line with a ball hanging on the lip of the pocket, you would select B for back spin and hit the ball with maximum power you would then "screw back" and prevent the cue ball following the object ball ignominiously into the pocket. Other spin options include top and side.

The Hustler's display is straightforward and clear. As you would expect, the baize surface is green - though it does look a little bit faded. Cushions and balls are red. Movement is smooth and realistic, despite the slightly small dimensions of the playing area. Sound is unexceptional but the theme tune pinched from TV's Pot Black is jaunty enough.

The ageing nature of the game is reflected in the price and consequently probably presents better value than any of the other snooker and pool games on the market. The ball movement is admirably fast and smooth although it's going to take some practice to get used to the angles. The screen colours are rather off-putting and could have been done in darker shades for more impact. Worth a look if you don't already have a pool game.

N. Hard to be completely accurate.
N. Won't prepare you for the real thing.

As far as pool goes, this has multiple players, choice of spin, smooth, clear graphics at a reasonable price. It won't, however, prepare you for the real thing.