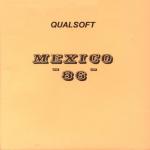 Computer football games just keep getting more popular, perhaps in inverse proportion to the number of people actually going to live games. In the last three months we've had two strategy games, two arcade games and one combination on the subject and with World Cup Fever rising, the pace isn't likely to drop.

This is an all-out strategy effort that certainly isn't aimed at the pretty graphics end of the market but, as the programmers' put it, "the intelligent adult". It comes in a twin cassette pack with one tape for the qualifying games and one for the finals themselves, for which you'll need a saved game from the completed qualifying section.

The game arrives accompanied by a letter explaining some details and philosophy behind the game and a detailed instruction booklet with plenty of background information and suggestions. The game can be played on five different difficulty levels and with varying levels of complication in your job. You don't have to worry about money in this game - just which eleven players to pick for each game, where and how to play them.

The qualifying tape includes five friendly matches followed by the qualifying tournament. The game begins with decisions on various levels of skill and features. There are five skill levels, three of which give you an advantage, one even and one where you are at a disadvantage. You next have to choose one of three "dimensions" which determine how much care will have to be taken when choosing your team.

Dimension one will judge players purely on whether they are goalkeepers, defenders, midfield or attack, whereas two will introduce a system whereby a player's suitability for playing on the left, right or centre is considered. Dimension three goes even further and analyses the blend of the team's skills to see if you have the right balance of goal scorers and goal makers.

Injuries and short term form changes can also be introduced and will cause problems from match to match since you never know when a player may get injured or have an off day. All that lot can make choosing teams extremely complicated to start simple or you might lose 5-0 to Finland.

You're given an initial squad of 16 players, all established internationals, and can add up to 20 more of your choice. The initial 16 will all have their particular skills and for the ones you add, their second and third dimensions can be defined. From your squad, 11 players and five substitutes are picked for each game and this is where you have to pick wisely and learn from previous matches to mould a match-winning team.

The game itself is represented by a bunch of stickmen moving left and right in set formations on a pitch. Possession and play switch from end to end and some indication of the flow of play can be gleaned and even some excitement from the to and fro of the game. The graphics are extremely crude, but serve their purpose to indicate the game's events. During play, you can make substitutions or move players around the field in an attempt to improve the side's performance but this will take experience to use effectively.

Each player is rated at the end of the game and the table updated for qualifying games. Then the process repeats itself for each match until you've qualified for the finals or been ignominiously knocked out. Success will mean you have to save the game and load up the finals tape where you battle in similar style with 23 other teams in league and knockout competition. A squad of only 20 players is allowed but any of the nine not playing may be used as subs.

The flexible strategy element of the game means it can be as tough or as easy as you like and with everything to control it really does give you some of the problems and, above all, uncertainties of an international manager's job. Its obviously limited graphically, but with strategy games you have to expect that and it doesn't detract from the enjoyment of the game. At its most complicated and absorbing I found it a real challenge trying to win the cup although unlike league simulations you can't continue indefinitely. One nice touch is that the program is unprotected, *not* so that pirates can copy people's hard work, but so that the enthusiast can dabble about in the program changing it as he wishes. Good thinking!

P. A real challenge to the thinking football fan. P. Many definable features to tailor the game to your liking. P. Unprotected program encouraging you to alter it to your needs. P. Realistic simulation of the England manager's difficulties where picking players are concerned.

N. Graphics aren't essential but these stickmen do give the program a ragged feel. N. Certainly won't suit anyone who doesn't want to work for a win.

Bobby Robson could do worse than have a crack at this in his preparation for the World Cup Finals. It's complex and demanding - not just mentally but physically as well, given the time needed to play a whole game. The only major drawback is those uninteresting graphics. I think the game might have been classier without them.

It's complex and demanding - not just mentally but physically as well, given the time needed to play a whole game.