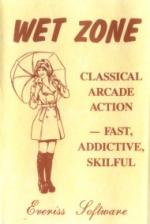 If you have ever played with a Vic 20, Spectrum or a C64 and have a very, very good memory, you may remember seeing a shoot-'em-up called Arcadia. It was fairly good in its time and the Vic 20 and Spectrum versions were very popular (C64 version was a complete flop). But it has since been superceded by far superior programs so I was very surprised to receive a BBC conversion of it for review.

For those of you unfamiliar with this game, let me explain the scenario with an extract from the inlay card:

"E0lanes are the most despicable excuse of a life form in the universe. They are nearing their goal of invading the mother planet, Earth. You are the ace pilot of the last remaining space interceptor. With luck and skill, you must destroy wave after wave of the attacking alien hordes. You are armed with your powerful dual plasma bolts.

The E-lanes have probed your minds which enables their ships to appear as illusions. Their images are based on the aquatic forms from your childhood on Graemsay."

What all this nonsense boils down to is that there is a spaceship at the bottom of the screen and lots of other spaceships fly past you dropping bombs.

As well as moving laterally, you can also thrust your ship up. For some reason, there is gravity in this part of the universe, so your ship will automatically fall to the bottom of the screen. There is also a counter at the top of the screen and rather than destroying all the aliens, you have to survive the attack until this counter reads zero in order to move onto the next wave of aliens.

There are supposed to be twelve types of alien but I just could not get through all of them. Although the animation is good and the aliens move with incredible speed, I felt that more effort could have been put into the design of the characters (which are single colour). Also, the title page is indescribably crude and the sound effects are abysmal. Since all the Firebird games are better and cheaper, I cannot recommend this game very highly.