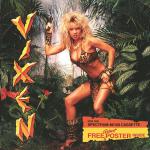 Okay, so my mate Matt Bielby gets to meet Vixen star Corrine Russell in the flesh, and I get to play the game. Life can be very cruel. Still, I'm used to getting the rough end of the pineapple.

I suspected the game would turn out to be a naff offering with a tiger-skin clad cleavage on the cassette cover as its main selling point. Actually it isn't bad.

The animation of the main figure is really very good, slickly smooth with a wiggle in her walk. The ST animation is especially good. When Vixen runs, watch out for the way her hair bounces. I wonder what shampoo she uses?

The gameplay however, is a little suspect, lacking variation.

The setting is the planet Granath, populated by hordes of rampaging reptillian creatures. Stalking through this world, armed only with a whip is the striking figure of Vixen. Abandoned as a child and raised by foxes, Vixen has somehow gained magical powers which, under certain circumstances, enable her to transform into a fox.

Each level of the game must be completed within the set time limit. On the way, Vixen must collect gems, extra time, lives, mystery bonuses and battle against the monsters, lashing them with her whip.

She also has to accumulate Fox Time which allows here to transform unto a fox and try out the underground levels.

Because all the gems, bonuses, etc, are on the floor, and also that the monsters are fairly small, most of the first levels are played with Vixen in a crouching position. This I found a little tiresome.

Apart from the increasing difficulty of the levels, there doesn't seem to be much more to Vixen above ground.

The underground fox levels are really just for bonus points against the clock, no real brushes with death.