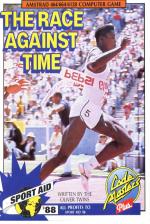 How are you really expected to criticise a game which it is hoped will raise loadsamoney for Sport Aid '88, the charity fighting hunger, poverty and disease among children worldwide? To say anything against it would be churlish to say the least. Even if this game's bad, it's good. Right?

And, in fact, what we have here is quite a decent arcade adventure for a fair price.

"An excellent example of how compulsive and addictive a game can really be!!!" That depends on what other games you've ever played. And: "Absolutely brilliant - this is one of the best computer games ever written!" Now steady on! That really is going too far.

In Race Against Time you play the part of Sudanese runner Omar Khalifa. He's the athlete who, back in 1986, lit a torch from the campfire in an African village and ran with it through Europe and the United States to launch Sports Aid.

Nicely programmed and playable, Race Against Time has to be a recommended buy. It even has Peter Gabriel's Games Without Frontiers as a soundtrack.

A decent arcade adventure for a fair price... But that blurb? "Absolutely brilliant - this is one of the best computer games ever written!"? Now steady on! That really is going too far.