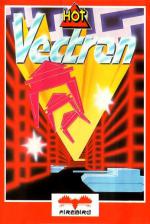 The more attentive of you may be experiencing a touch of déja vu as you read this... that's because Vectron was first launched by Insight and was checked out in the first issue of YS.

For those who've forgotten the tale, your ship is trapped in the subspatial dimensions of a computer and, using your UD Cannon and shields, you have to search out the exit to a maze. Only then the trouble really begins!

Up on-screen, you have it - 'Destroy all enemy craft'. Not exactly the most comprehensive instructions I've ever seen, but the phrase does seem to cover all the angles. Indeed, once you're playing the game - directing the cross-hairs of your UD Cannon around the 3D maze at 90mph! - it's difficult to remember even to fire at the enemy as you try desperately to manouevre round a corner without ending up as a nasty stain on the wall.

The screen has the usual array of control panels but things go so fast that it's best to keep your eyes glued to the action. More useful is the maze map that can be superimposed over the view out of your craft - at least then you've some idea of what's coming up around the corner!

Overall, a pretty good game and one guaranteed to keep your attention. The graphics are good and fast, and the 3D effects are pretty realistic. My only criticism is that the game might be a little too difficult for casual arcade players - but who's going to admit to being one of them?

The graphics are good and fast, and the 3D effects are pretty realistic.