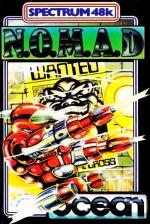 Buy a joystick before attempting this game - the keyboard combinations must be the worst ever devised for a Spectrum! That said, N.O.M.A.D. must be one of the most addictive games ever written if you're an arcade enthusiast.

You control a robot through a future city - which looks a lot like a circuit board - in search of the HQ. Once at the HQ, of course, it's 'grievous bodily harm' time - but don't worry about that too much right now as it'll be ages before you get that far!

N.O.M.A.D. can be spun around in either direction, and can be thrust forwards and backwards. The robot lurches around the screen, but can be controlled carefully with experience. And, of course, there's the trusty laser gun - you never run out of ammunition so it's a good plan to spatter anything in sight.

There are all sorts of nasties as you progress through the corridors - from heavy guns to homing missiles to robot thugs. But there's tactics too - in knowing where the magnetic walls are, which rooms have zero inertia, and which switches control which doors. These last few problems can only be dealt with after you've lost one of your big lives finding out about them, but the game's addictive enough to keep you coming back for more.

Points are awarded for destroying anything that looks faintly like an enemy, but if you can pass a particular section of the game without violence then good luck to you. The only advantage to devastating the various screens is that if you lose a life you start from the beginning again - only the next time through, there's less to watch out for. Once you get past a specific section of the game and lose a life, you start from the beginning of that section - which is a darned good idea and saves a lot of frustration. Overall ... absolutely fab!

Absolutely fab! Once you get past a specific section of the game and lose a life, you start from the beginning of that section - which is a darned good idea and saves a lot of frustration.