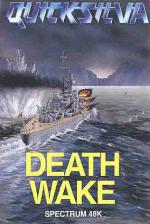 Death Wake is a pretty good wargame. It's based around the adventures of The Undaunted, a destroyer that can float just about tong enough to avoid patrol boats and dodge the enemy planes. Its mission, to destroy the research plant, busy in the development of the atomic bomb.

The screens don't look that spectacular at first sight - and nothing compared to the stunning portrait on the cassette cover - but they are certainly up to giving you a good idea of what's going on. In most wargames I've played, the instruction booklet accompanying the package is so daunting that play can be forstalled by half an hour while you keep looking up what you need to do to win. Death Wake is much more friendly as it mixes the traditional wargame format with arcade action, so that beginners can plough into the battle and sort out tactics.

As wargames go, it's not the best in the world... but, on the other hand, it does have enough addictive qualities to grow on you. And that's coming from someone who rarely recommends wargames. Check it out?

As wargames go, it's not the best in the world... but, on the other hand, it does have enough addictive qualities to grow on you.